In November, St George’s School in Luxembourg City entered two teams into the RSC Belgium annual ‘Top of the Bench’ (TOTB) competition. This prestigious event is open to all schools in Belgium and Luxembourg region.

The RSC Belgium ‘eliminator’ took place in unusual circumstances as the planned event in Brussels had to be cancelled at the very last minute (St. Georges were already on the bus from Luxembourg) due to a terrorist threat and the subsequent ‘security lock down’ of Brussels.

So instead of the 'face-to-face' event, each team was sent tests to complete and return to the section for marking. Team Hydrogen from St George's did really well and won the RSC Belgium regional heat! And as a result of this victory they received the Keith Price Cup and entry into the final of the TOTB competition representing RSC Belgium. The following is a short description of their experience at the RSC's main competition in the UK. 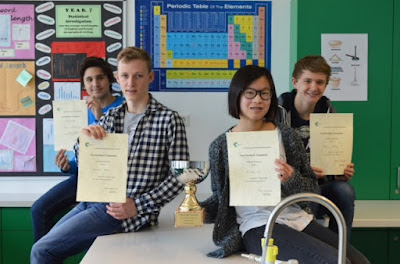 TOTB
The TOTB final was held at Loughborough University, in the UK on Saturday 16 April. It was jointly hosted by the Royal Society of Chemistry and Loughborough University’s Chemistry department. In total 32 teams participated in the event, all of which had made it through their regional eliminator rounds to earn the right to compete against the best schools in the UK (and St George’s). 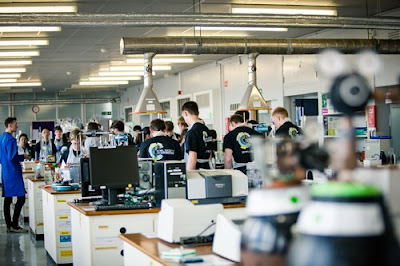 It was a great event, starting with an individual round – which was essentially a chemistry exam, followed by the main event which was a team round involving a series of very complicated chemistry investigations regarding batteries and energy (see above). To round off the day, students were invited to view interactive presentations from some of Loughborough University’s post-graduate chemistry students on the various research projects that they were working on. All the competing teams were used as a voting panel and asked to decide where they would like to see further funding utilised.

Despite the St. George's team not making it into the top six ranked places, this competition was an excellent opportunity for the students to challenge themselves and see the various avenues of research that university students are taking after studying chemistry.

This event certainly stretched their ability and provided a great insight into teamwork and working under pressure. Overall it was an enjoyable experience for all members involved, including the staff! 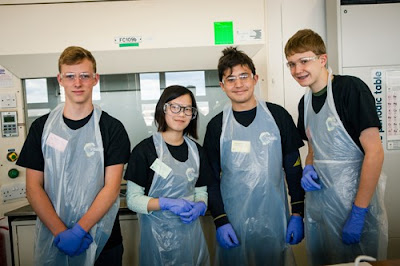