RSC Belgium members and friends will be saddened to learn of the death of one of our most active and energetic committee members and an excellent professional chemical scientist: Dr Ian Carson.

Ian died peacefully on 27 June 2017 at his home in Chaumont-Gistoux with his family around him. A memorial service was held for him at the Champ de Court crematorium near Court Saint Etienne on 4 July 2017. Ian served on the RSC Belgium section committee from 2004 until the end of last year and was section secretary in 2010-2011 and also membership secretary for many years.

At the service RSC Belgium chairman Tim Reynolds gave the following tribute to Ian on behalf of the section: 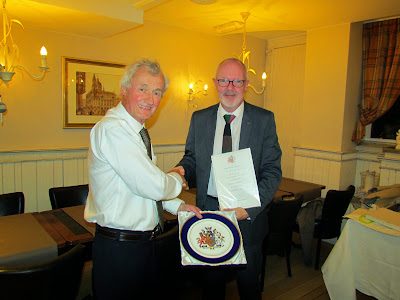 "For me, Dr Ian Carson was the epitome of a professional chemical scientist: he knew his subject inside out and he was a lifelong enthusiast for chemistry – and polymer chemistry in particular. He was diligent and thorough, but also creative.

Ian’s chemical career started with a first class honours degree in chemistry from Strathclyde University in Glasgow in 1965, swiftly followed by a Doctor of Philosophy (Ph.D.) studying applied and polymer chemistry in 1968.

After a year as a Royal Society Postdoctoral Research Fellow with the Institute of Industrial Chemistry at the University of Genova, Italy from 1969 Ian embarked on a 32 year career with petrochemical giant - Shell - working in initially in the UK, then in Holland, and finally from the early 1990’s in Belgium.

He worked on a wide range of topics from scaling up catalyst systems to providing technical advice to business units and investigating marketing applications for polymers.
In his final ten years with Shell Research Ian was based at Louvain La Neuve, where he was Manager Polyesters responsible for research and technical service provision including work on, the now ubiquitous, PET plastic bottle and various polymers for use with textiles.

It is worth considering that it is highly likely that all of us today will wear or, certainly, will touch an object that is made from a material that Ian was intimately involved in refining or creating. That was Ian’s chemistry.

Ian retired from Shell at the end of 2001 and became a Polymer Consultant continuing to use his knowledge and skills for the benefit of a portfolio of companies and society.

And, fortunately for us, he also found time to bring the benefit of his experience and enthusiasm for chemistry to the Royal Society of Chemistry’s Belgium section. Ian had been a member of the RSC since 1967 – eventually clocking up over 50 years as a member of the society, and from 2004 he joined our executive committee.

Ian was as diligent and creative for RSC Belgium as he had been for Shell. Researching event ideas, contacting potential speakers and – most importantly – making things happen!

His contributions to RSC Belgium were wide ranging, but in particular I remember his shepherding of our demonstration lecturers in their tours of schools around Brussels and beyond, his language skills enthusing younger people from different communities about chemistry in our work with the Greenlight4Girls initiative and our own Top of the Bench competitions, and his organising work for our annual Café Chimique events.

But Ian was a very unassuming person – not one to blow his own trumpet as we might say – so it was particularly pleasing that we were able to recognise Ian’s contributions to RSC Belgium in 2015 with a Long Service Award – recognising his 10 years’ service to the section – and as a special mark it was presented in person to Ian at a dinner in Brussels by the Society’s CEO Dr Robert Parker (see photo above). Ian truly deserved the award.

We thank Ian for his contributions to chemistry. We will miss him. We already do."