The Keith Price Cup was formally presented to Belgium's 2011 Top of the Bench (TOTB) competition winners - British School of Brussels (BSB) - at their end of term assembly on Friday 8 April.

The BSB team had a great time competing with teams from some of the very best schools in the UK and finished with a very respectable 'mid-table' score. 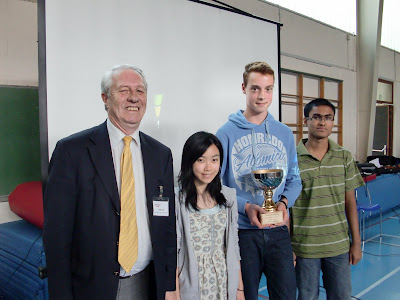 New name
The RSC Belgium TOTB Cup has been recently renamed as the Keith Price Cup in honour of our first Chairman and principal "founding father" of the section.

The cup (see below) will now be engraved with the name of the winning school each year. Our annual TOTB "Belgian eliminator" competition is open to all schools in Belgium and is usually organised during late November and early December. For more information, please contact Rita Woodward. 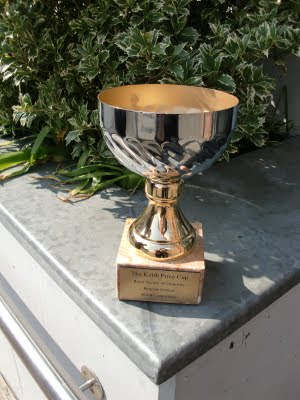 It was with great sadness that the section learnt of the death of Dr. Keith Price on Sunday 3rd April following a prolonged battle against cancer. Keith was the main inspiration for the founding of the RSC Belgium section, its first chairman and a stalwart member of the committee over 16 years.

Keith was an extremely active and voluble member of the section – in fact the only time he was ever lost for words was when he received his Long Service Award (see below) at the 2006 AGM. Keith was one of the very first members of an RSC international section to receive this honour. Keith is pictured with his wife Jackie and Section Chairman at the time Paul Gray. 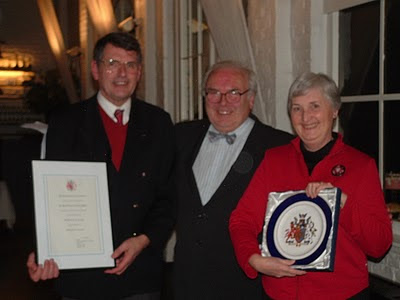 Keith had a long and successful career in the direction of research with Monsanto in their Louvain-la-Neuve site, before retiring and forming his own consultancy business specialising in coordination and management of research projects, in particular for European framework programmes.

Keith and Jackie moved back to the UK from Belgium in 2006, but kept in contact with the section.

Our best wishes and heartfelt sympathy go out to Jackie, their two children, Gavin and Annelli, and the rest of Keith's family. The funeral will take place at Saint Mary’s Church, Ely, Cambridgeshire at midday on Tuesday 19 April. A number of section members plan to be there to pay their respects in person.

Prior to our learning of his death the section committee had already decided to honour Keith’s contribution to the section by renaming our Top of the Bench competition trophy, awarded annually to the school team that wins our national eliminator, the Keith Price Cup.

Donations to Addenbrooke’s
It was Keith’s express wish that, in lieu of flowers at his funeral, donations should be made to the Haematology Day Unit at Addenbrooke’s Hospital in Cambridge.

Those wishing to make a donation by credit card can access the Addenbrooke’s Charitable Trust (ACT) online donation website, where a drop down menu allows donation to a specific ward. The Haematology Day Unit is Ward E10 and can be found by scrolling down the list. There is also an opportunity to indicate that the donation is in memory of Keith.

Alternatively a cheque drawn on a UK bank and made out to ‘ACT (Ward E10)’ can be sent to:
ACT
Box 126
Addenbrooke’s Hospital
Hills Road
Cambridge CB2 0QQ
Posted by RSC Belgium at 09:46 No comments: