RSC Belgium Chairperson Tim Reynolds has been elected as the Chair of the RSC's International Steering Group. Tim received over 50% of the votes cast in the ballot for the position that attracted a good number of nominations from RSC's various international sections.

Tim will be attending the RSC General Assembly in Manchester on 13 and 14 November including the Membership Networks Committee (MNC) meeting on Friday 13 November where he will be representing the interests of RSC international members. He will also be attending the International Delegates Day on 12 November.

One of the MNC's main tasks at the moment is a regional review that is working to build a more representative and responsive governance structure for the RSC.

"Today more than one in five of RSC members live and work outside the United Kingdom and the Republic of Ireland: for example ‘continental’ Europe represents 7% of total RSC membership. And international membership will be the main area for growth in the future," says Tim.

"A key element of RSC strategy is to ‘bring together and empower our global chemistry community for the benefit of science and humanity’, so it is vital that the voice of international members is clearly heard by decision-makers in the Society," he continues. "As the newly elected chair of the International Steering Group I will work hard to ensure that the views of international sections are heard and fully represented. With increasing globalisation I believe that the distinction between ‘local’ (i.e. UK/ Eire-based sections) and ‘international’ sections is increasingly irrelevant: all sections should be equal."

Tim has been a RSC member since May 1993 and has served on a number of RSC committees including the Committee for Promotion of Chemistry to the Public and the International Strategy Group. He is currently a member of the RSC Government Affairs Committee.
Posted by RSC Belgium at 16:41 No comments:

Mud Lane, Piccadilly and the Strand

On Saturday 19 September RSC Belgium members and friends enjoyed a fascinating walking tour in one part of Belgium that will be forever part of British history and the history of warfare. Ploegsteert – or Plug Street as the World War One ‘tommies’ called it – was on the front line of the Ypres salient for most of the Great War and reminders and memorials of the conflict are everywhere.

The tour was led by local expert Claude Verhaeghe and took us to some recently excavated sites in areas where the first gas attacks of the war took place. 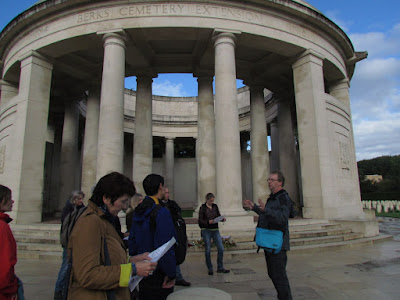 The RSC party met up close to Ypres railway station and took a coach to the monumental Ploegsteert memorial (see above) where we met up with Claude and then took a walking tour along Mud Lane via a series of military cemeteries to the site of the Christmas Day truce (see below). 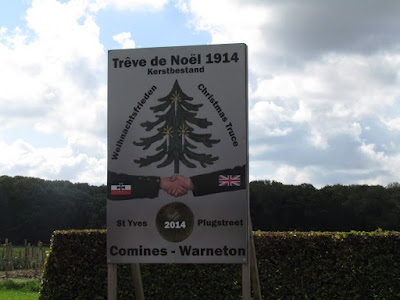 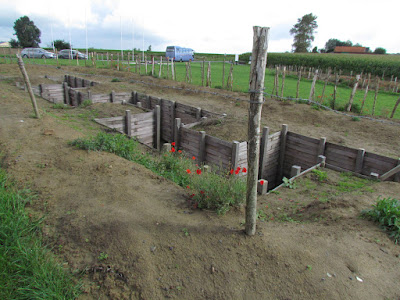 The Ploegsteert area in in that curious part of french-speaking Wallonia that butts into Western Flanders. Clearly its mixture of francophone and Flemish place names were too much for the first wave of mainly London bred British soldiers based in the area from 1914. This led to familiar London place names replacing local ones in their military maps. Tracks through the woods were known as the Strand, Regent Street and Haymarket.

Claude described the situation of the men on the frontline, told various episodes from the war in the area, and the fascinating, individual stories of many of the men who lost their lives. 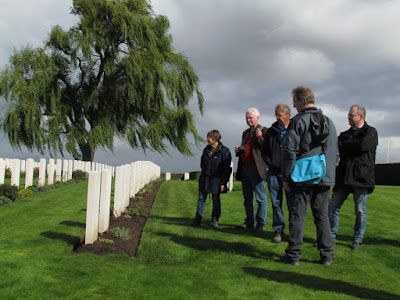 At the Prowse Point cemetery (see above) – one of the few cemeteries that are ‘open’ to receive the bodies of the soldiers that are still being discovered in the area - Claude and section secretary Becki Scott described their involvement in the discovery, scientific identification and reburial of Australian solder Alan Mather and how just a few years ago.

After the walk a brief coach tour took us past Bruce Bairnsfather’s ‘cottage’ and some of the craters formed by the huge explosive mines employed by both sides.  It was disconcerting to realise that a number untriggered or unexploded mines are still buried in the region. The last victims of World War One was in 1955 when an untriggered mine exploded. But hazards from the discovery of conventional unexploded ordnance and even gas shells are still common place in the area.

After a very pleasant lunch at the restaurant L’Auberge our party returned to Ypres via the Church crypt at Messines where Adolf Hitler had been treated for injuries during the war. We learnt that Winston Churchill had been in the same sector in 1916 when commanding a battalion of the Royal Scots Fusiliers following his resignation from government following the Gallipoli debacle. Both future leaders were enthusiastic painters and both had painted the church at Messines.

Our thanks to Becki Scott for organising the logistics of the trip and to Claude Verhaeghe for being a very informative and entertaining guide. You can find out more about Claude’s battlefield tours here.