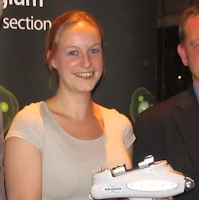 RSC Belgium’s section secretary Becki Scott is a post-doctoral researcher with the NWO Island Networks project at Leiden University and is currently on a month long archaeological holiday mission in the Caribbean! There she is using her trusty phaser pXRF machine (see right) on ceramics and sampling clay deposits. And what is more she is keeping a daily blog diary so we can keep up with her Caribbean adventure!

Becki has a BA in Archaeology and an MA in Cultural Landscape Management from the University of Wales, Lampeter, and an MSc in Forensic Archaeology and Anthropology. She was awarded her PhD in 2011 in Archaeological and Forensic Glass Analysis from Cranfield University and joined the RSC Belgium section when she moved to KU Leuven in Belgium as a as a post-doctoral researcher on the ERC funded ARCHGLASS project analysing the effects of recycling on Roman glass compositions.

During this time, she developed an interest and expertise in the use of portable X-ray fluorescence spectrometry (pXRF) for the non-destructive analysis of archaeo-materials: a skill that Becki has used in a variety of projects for museums, archaeological units, and heritage institutions.

Island Networks
While working for KU Leuven, Becki began collaborating with the HERA Carib Connections project, developing a method for analysing the composition of indigenous ceramic objects from the Lesser Antilles. Becki's work helped identify the provenance of ceramic objects in the field, whilst working in Grenada. Her current role on the NWO Island Networks project continues this work to cover other islands in the Lesser Antilles.

The focus of the NWO Island Networks programme is the inter-community social relationships and transformations of island networks in the Lesser Antilles across the historical divide. The period AD 1000-1800 represents an archaeologically understudied and turbulent era during which the islands’ inhabitants came under increasing influence from South America and the Greater Antilles and participated in the last phase of indigenous resistance to colonial powers.

Caribbean archaeological research has focused on patterns of regional and pan-regional mobility of peoples and the exchange of goods and ideas during the pre-colonial period (pre-1492). Recent investigations have for the first time provided insights into early colonial period indigenous archaeology in the Lesser Antilles through the discovery of 16-18th century Amerindian settlements and associated material culture repertoires.

These discoveries offer a unique opportunity to study continuity and change in inter-community social relationships, and transformations of island networks at the advent of European colonialism using a multi-disciplinary approach.

Other interests
As well as being the secretary of the Royal Society of Chemistry (RSC) Belgium Section, Becki is also a member of No Man's Land (NML) the society for Great War Archaeologists and she was a winner in the 'I'm a Scientist, get me out of here' online science communication competition and is in the process of developing an 'Archaeometry' card game.

You can read Becki’s blog here and she is also on Twitter! Alternatively you could catch up with Becki’s adventures at our AGM on Friday 10 February at Les Amis Dinent Restaurant in Wezembeek-Oppem.
Posted by RSC Belgium at 10:27 No comments: 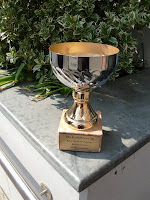 The results of the RSC Belgium Top of the Bench (ToTB) eliminator for 2016 have been confirmed and the winners announced. And the winner of the Keith Price Cup (pictured right) for 2016 - and the Belgian representative in the TOTB grand final in the UK in 2017 - will be team Vanadium from St. George's International School in Luxembourg! St. George’s made a winning debut in the competition last year and now retain the cup for 2017.


We were unable to hold our usual practical Saturday event in 2015, due to the Brussels security lock down, so it was a great relief to get back to normal on 3 December and welcome 11 eager teams from six schools to the chemistry labs at the British School of Brussels (BSB) for our ToTB ‘international’ eliminator. 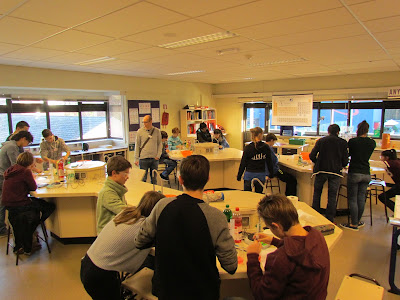 The teams completed individual written question papers and then enjoyed a challenging team Practical Problem Solving Exercise. As usual both the 'hands-on' practical and the paper-based component were developed by our resident competition guru, Rita Woodward. The competition was designed to really test the teams’ chemistry knowledge and problem-solving abilities and (hopefully) encourage young talented chemical scientists to consider further education and careers in Chemistry.

Winners
The individual scores from the written paper were added together for each team with the placings from the practical to give an overall score. And for the second year in a row a team from St. George’s won out- the Vanadium team. Members of the winning team (pictured below) each received a RSC heat sensitive mug and the school will hold the TOTB Keith Price Cup during 2017.

Two teams were joint runners up: the Scandium team from BSB and a second team (Gallium) from St. George’s with members receiving a RSC phone battery charger. Every student that took part in the competition received a certificate. 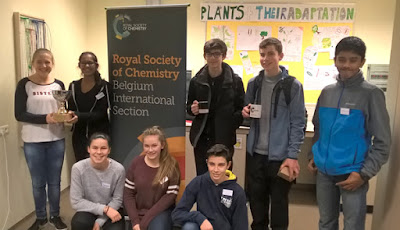 The two teams from St George's are pictured above with the Keith Price Cup, their prizes and certificates.

Full results
As ever, the RSC Belgium ToTB eliminator was a close-fought competition with a total of 11 teams from six schools taking part.

The full line up of participating teams for the 2015 competition is listed below:

The TOTB Finals will take place in Loughborough in the UK during Spring 2017 and RSC sponsors the travel arrangements for our winning team. The RSC Belgium team is usually the only competing school team not based in the British Isles.

St. George's Hydrogen team had a great time at the 2016 finals so we wish good luck to the Vanadium team from St. George’s in 2017! Our next TOTB Eliminator Round will take place in Q4 2017.
Posted by RSC Belgium at 19:32 No comments:

On the evening of 18 November 2016 RSC Belgium members and friends enjoyed a 'A Journey through the World of Iron' with our recent past Chairman Prof Bob Crichton. This special public lecture was part of a two-day symposium on the role of iron in biochemical and biomedical environments organised to celebrate Prof Crichton's significant contributions to this field. The lecture was followed by a RSC Belgium sponsored reception in Bob's honour.

The venue for our sponsored lecture was Theatre Lavo 51 in the Lavoisier Building at the Universite Catholique de Louvain in Louvain-la-Neuve and celebrated 50 years of research into the biochemistry and metabolism of metalloproteins and also marked the 75th birthday of the speaker, UCLouvain's Emeritus Professor, and ex-RSC Belgium Chairman, Robert R. Crichton (below). 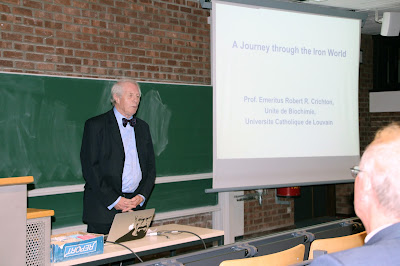 During the Symposium, world experts in the biochemistry and metabolism of metalloproteins, especially iron-containing proteins, delivered keynote lectures on their most recent achievements in this area. The lectures presented biochemical studies of iron metabolism, novel therapeutic opportunities and diagnostics, the search for new metal chelators and their crucial importance, together with the results of worldwide research on inflammation and neurological disorders such as Parkinson’s disease. Metalloproteins, especially iron-containing proteins, play a crucial role in numerous diseases, including cancer.

Celebration
The symposium and public lecture enabled us to celebrate the achievements of Prof Bob Crichton who was appointed as a professor of biochemistry at the Université catholique de Louvain in Louvain-la-Neuve in 1973 and introduced biochemistry as an mandatory part of the teaching of all chemists at the university. Bob's achievements in the biochemistry of iron proteins have been recognised at international level and he is worldwide leading figure in this important area of science. 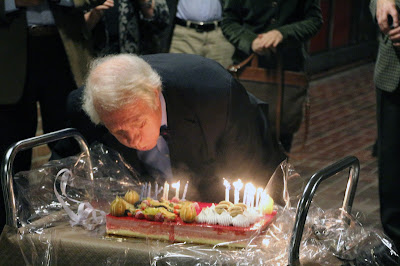 After the public lecture an excellent reception was held including a special cake to celebrate Bob's birthday. Bob's long-time colleague at UCLouvain, Prof Istvan Marko, spoke very warmly of Bob's achievements to much applause.
Posted by RSC Belgium at 16:44 No comments: