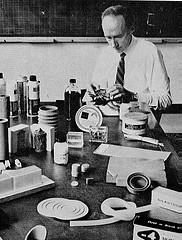 Members and Friends were sadden to hear the news of the sudden death of Dr. who passed away in the early hours of Sunday 17 March at home in Lasne. ‘Uncle Norm’ had a long and distinguished global career with Dow Corning and was a fervent supporter of RSC Belgium including as an active committee member from 2001 to 2006.

Always full of ideas and enthusiasm for chemistry, among many other achievements, he was responsible for organizing a number of excellent excursions (aka Lloyd’s Tours) for the section: including a memorable trip to Luxembourg in 2004.

Norman will be greatly missed by his wife Setsuko, children Kazumi and Michiko, his extended family, and his many friends and colleagues.

This will be followed by a gathering with friends and family at the Lloyd’s house in Lasne.

The Norman C. Lloyd scholarship
In lieu of flowers, Setsuko and the family would like donations to be made in the name of ‘Norman C. Lloyd’ to a scholarship fund that is being established by the Royal Society of Chemistry, section.

A donation would have special meaning for the family as the new scholarship fund is intended to support and encourage students to study chemistry, a subject very close to ’s heart.

Details of how to make a donation are given below.

Please indicate that the donation is for the ‘Norman C. Lloyd fund’
Posted by RSC Belgium at 22:22 No comments:

A good crowd of RSC Belgium members and friends braved some wintry weather on 14 March to hear a fascinating talk from forensic archaeologist Dr. Andrew Shortland of Cranfield University in the Swoosh Lounge at the British School of Brussels. Andrew described the work of his group in characterising porcelain - the 'white gold' of antiquity.

Andrew started with the story of the 'Ruislip Vase' a seemingly modest piece of porcelain discovered in a very ordinary house in north-east London in 2010. Having been used recently as a bookend it was recognised as an 18th-century porcelain vase made for the Qianlong Emperor of China. Valued initially at £1 million it sold at auction for over £ 50 million: a world-record for such an artefact. However, the object was not collected or paid for by the purchaser and the vase has recently been finally sold by auctioneers Bonhams for a more modest - but still substantial - £20 - 25 million. 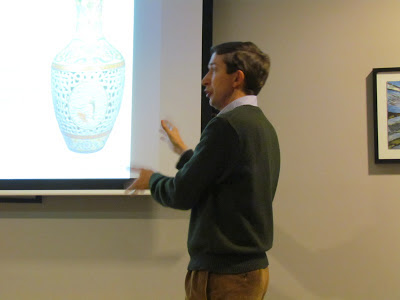 Clearly porcelain is truly a 'white gold'. This reputation has held true across the centuries and recently the volume of sales of antique porcelain has increased rapidly. And, of course, this attracts the interest of 'entrepreneurs'. Dr Shortland brings the techniques of modern analysis to porcelain with the aim of identifying copies and fakes in Chinese and European porcelain.

Art of porcelain
The production of the thin glass-like ceramic known as porcelain probably began in China in the first millennium BC, but the earliest fine examples date from circa 650 AD. From the early medieval period Chinese porcelain was being exported and was greatly prized throughout the royal courts of the old world.

There was huge competition to create porcelain in Europe to rival those pieces produced in East Asia and in the early years of the eighteenth century this was accomplished, first at Meissen and then throughout Germany, France, England and elsewhere. Early examples of both Chinese and European porcelain are rare and growing in value - as witnessed by the Ruislip vase story. They have therefore been extensively copied, both by the factories themselves and by others seeking to imitate their wares.

Andrew's talk showed how two modern non-destructive analytical techniques - hand held X-Ray Fluorescence (XRF) and Laser ablation inductively coupled plasma mass spectrometry (LA-ICP-MS) can distinguish between genuine early objects and later copies and fakes in both Chinese and European porcelains. His research has been conducted with a number of the world's leading auction houses who - obviously - have a keen interest in the findings.

The insights provided by Dr Shortland was appreciated by our audience and there was a very good discussion after his presentation about the determination of the true provenance of antiques and art objects.
Posted by RSC Belgium at 11:32 No comments:

Following a small pilot run in 2010 and two highly successful full runs in 2011 and 2012, RSC Belgium Section is happy to announce its Schools Chemistry Challenge 2013.

The RSC Belgium Chemistry Challenge competition is open to students from any school in Belgium. The section is looking to make the 2013 Challenge an even bigger chemistry competition! In 2012, well over 100 students took part.

Details of the 2013 competition format can be accessed here. The Chemistry Challenge questions will be set in English, but may be answered in English, French, Dutch or German.

The competition is open to school students in their penultimate year of High School (usually aged 16 – 17) and consists of a total of two hours of written test papers held in individual schools and designed to demonstrate the participants’ knowledge of chemistry and their ability to think logically.

Two formats
For 2013 the Challenge can be taken in two ways: either as a single two-hour paper (as for 2012) or split into three stand-alone, separate sections (Section A 30 minutes, Section B 60 minutes and Section C 30 minutes) which teachers might find easier to work into their timetable constraints. Teachers would need to decide on their preference by the time they tell us the approximate numbers of students that will participate in the 2013 challenge from their school.

To get a taste of the Challenge you can access the 2012 papers here.

There are plenty of attractive cash prizes on offer for the highest scoring entries, as well as certificates acknowledging participation for everyone who takes part.

We have found that students find that participation in the Challenge is a valuable ‘plus point’ when completing University application forms, clearly demonstrating an ‘extra curricular’ interest in science.

The common curriculum on which the competition will be based will be circulated for validation by teachers in the near future. The Challenge papers will then be distributed to participating schools in mid-May with completed papers to be returned to Rita during June.

Powering Ahead with the President

RSC Belgium was delighted to welcome RSC President Prof Lesley Yellowlees to the section on the evening of Monday 4 March. Lesley’s talk on Solar Power in the Brel Theatre at the British School of Brussels (BSB) was well received and topped off a hectic long weekend for her on RSC business in Brussels.

Prof. Yellowlees is the first woman to hold the Presidency of the Royal Society of Chemistry. She held a personal chair in Inorganic Electrochemistry at the University of Edinburgh and is currently Vice Principal of the University and Head of the College of Science and Engineering. Lesley’s research interests include inorganic electrochemistry, epr spectroscopy, novel processes for carbon dioxide conversion and solar energy: her topic for discussion on Monday evening. 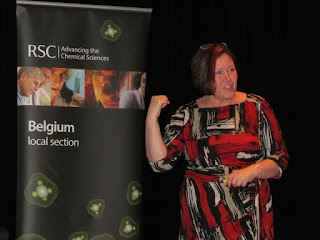 Just over 60 members and friends heard Lesley describe the problems posed by the ever increasing demand for electricity from an ever increasing global population. To meet these demands will require sustainable renewable energy sources. For Prof Yellowlees this means solar power and this is an area where chemistry is making a big contribution.

Solar and chocs
Lesley outlined how Dye Sensitised Solar Cells work and the research that she has undertaken in Edinburgh to characterise such cells using techniques such as uv/vis and epr spectroelectrochemistry in the search for optimised formulation that can provide us with cheap solar power. Lesley’s presentation from 4 March is available here.

A recent RSC Policy document on Solar Fuels and Artificial Photosynthesis shows how current and future science and innovation could change our future energy options.

Lesley was accompanied on Monday evening by RSC CEO Robert Parker. The two were in Brussels following the major triennial RSC Editors Symposium that had been held in the city over the weekend involving some 300 editors of RSC publications and 80 RSC staff. RSC Belgium chairman Bob Crichton and section secretary Tim Reynolds had been invited to the symposium banquet on Sunday evening at the Concert Noble.

CSA visit
Lesley and Robert were also able to meet at the European Commission’s Chief Scientific Adviser, Prof Anne Glover on Monday morning. The meeting was arranged by Tim Reynolds and they discussed a number of issues where RSC could support or input to Commission initiatives, including topics such as diversity and promoting the value of science education to school students. 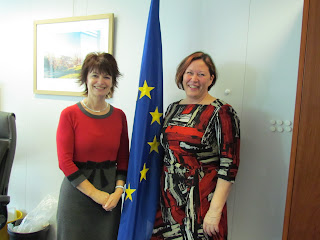 Prior to taking up her position as at the Commission Anne Glover was CSA to the Scottish government and Anne still has a laboratory and personal chair in at Aberdeen University, so Lesley and Anne have known each other for a number of years. Anne, like Lesley, is a passionate believer in the need to ensure science – and factual evidence in general – is at the core of policy making. Clear communication of science is a key element of this.
Posted by RSC Belgium at 10:49 No comments: