24 March 2015 saw an exciting chemistry extravaganza at the British School of Brussels as RSC Belgium welcomed RSC Council member Prof Sir John Holman of the University of York to deliver one of his famous demonstration lectures. His absorbing lecture covered a wide range of chemical sciences from instant ice cream making to explosive gun cotton and was highly appreciated by the packed audience of over 90 people.

Lectures by Prof Sir John Holman, who is nominated to be the next RSC President, are fun and dramatic, filled with the traditional chemical bangs and flashes, but always informative and relevant. And the performance on 24 March was no different with, in addition to ice cream and explosives, Sir John burning banknotes, making jelly babies scream, producing fireflies and even turning water into wine! 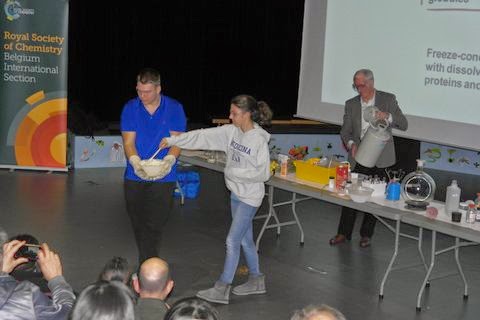 Sir John was assisted throughout the lecture by students from BSB (see above) and audience participation was also encouraged - especially when there was freshly made ice cream to be tasted!

Great feedback
Feedback from the audience showed that the show was very well appreciated by chemists and non-chemists alike. 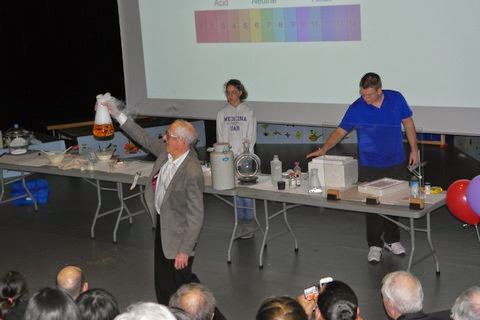 For example RSC Belgium secretary Becki Scott commented: "My four students (who are all from an archaeological, non-science, background) loved the talk! They have spent all morning asking myself and Patrick (my boss) whether we can make ice-cream in the office by liberating liquid nitrogen from the SEM. They were amazed by the colour change experiments, and the whole talk was a real eye-opener for them. John completely hit the mark with them, it was their first real interaction with main-stream chemistry (outside of high school). Although some of the theory was alien to them, John made it understandable and fun. I think they finally began to realise that you can engage and enjoy chemistry and science at any age, and that you don’t need to be a specialist. I also think his talk really encouraged them to consider further the role of science in archaeology.I totally understand why his lectures are so popular, it was a really good evening."

Clearly, the talk was a total success and after the lecture Sir John was mobbed by audience members of all ages asking questions. 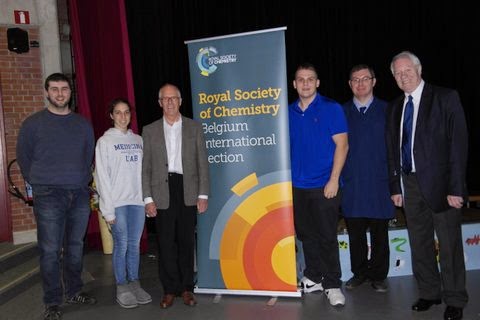 The event was well organised and very well received. The whole audience thoroughly enjoyed the event: it was a very visual and entertaining method of explaining science. Our thanks go to Brian Sutcliffe, Rita Woodward, Bob Crichton, and Phil Wilson and his team at BSB for their help in organising the event.

Sir John
Sir John Holman  is Emeritus Professor of Chemistry at the University of York and Senior Education Advisor to The Wellcome Trust. He is also the chair of the Management Committee of the York Science Outreach Centre and was a founding director of the Salters Advanced Chemistry programme. He has been involved with science outreach and education for a number of years, covering a wide range of ages and abilities.  In 2006 he was appointed the first National STEM Director and in 2010 received a knighthood for services to education. He is RSC Council's nominated candidate for the next RSC President.
Posted by RSC Belgium at 12:24 No comments: