Chemistry and Music: a Popular Combination!

On Thursday 19 April 2018 RSC Belgium members and friends were treated to an likely combination of Chemistry and Music at St Johns International School with Professor Adrian Dobbs of Greenwich University. This evening talk, chemistry demonstration and musical performance attracted a large and enthusiastic audience to the Music Room and its Grand Piano. 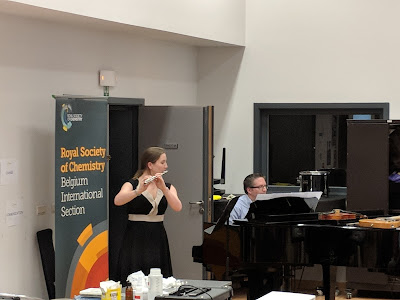 During the talk entitled 'Chemistry and Music: an unlikely combination?' Prof Adrian Dobbs, accompanied by Sophie Brewer, discussed the historic links between music and chemistry, including how chemistry has contributed to the manufacture of musical instruments and how many famous musicians have had links to chemistry and much more! Did you know that quintessential English composer Edward Elgar was a keen amateur chemist. Or that Russian compose Borodin was torn throughout his career between the professions of chemistry and music. 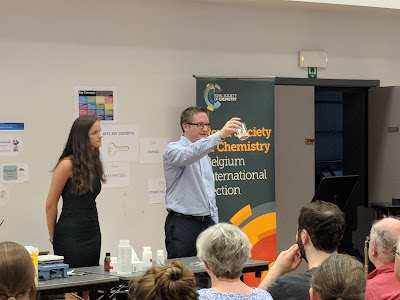 We learnt about the chemistry behind Stradivarius's violins and guitar strings and Adrian and Sophie performed a number of musical pieces with Adrian playing the piano and Sophie on flute and violin. 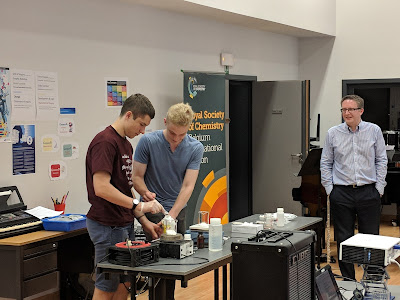 In addition Professor Dobbs recruited volunteers from the audience to participate in some demonstration chemistry including making your own polymers and simple electroplating. All using chemical substances commonly found in the home.

All in all the event proved that Chemistry and Music was a very interesting combination and was greatly appreciated by our audience.
Posted by RSC Belgium at 15:46 No comments:

Our 2017-18 programme continued on Thursday 22 March with a fascinating insight into the CRISPR-Cas9 gene editing technology with Prof Bernard Hallet from the Universite Catholique de Louvain in his talk: 'Genome Editing by CRISPR-CAS9: Turning a Bacterial Trick into a Biotechnology Revolution”.

Prof Hallet (pictured below) described the biological and chemical basis of the CRISPR (Clustered Regularly Interspaced Short Palindromic Repeats) technique and how the development of targeted genome editing systems, such as CRISPR, and their applications has moved forward enormously in the last decade.  In the last five years the field has undergone a quantum leap with the introduction of CRISPR-Cas9, the bacterial immune system which can be used to edit genomes on demand.

Bernard outlined how this serendipitous discovery that bacteria contained DNA sequences which were repeated, and interspersed with unique sequences, latterly identified as viral DNA, derived from viruses that had previously infected the bacteria. 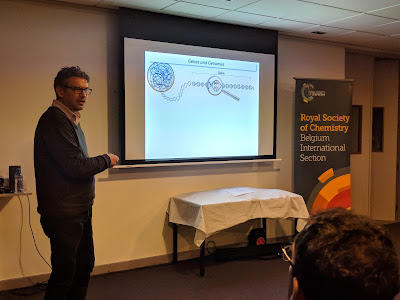 It was then found that close to the CRISPR sequences, genes were located coding for CRISPR-associated proteins (Cas), which have nuclease activity. Together with small guide RNAs (crRNAs) which have been transcribed from the CRISPR locus, one or more Cas proteins form ribonucleoprotein targeting complexes, with each contain a single guide sequence. The Cas nuclease (usually Cas9) then cleaves the target DNA, marked for degradation by base-pairing with the crRNA.

In 2012, Emmanuelle Charpentier and Jennifer Doudna proposed that the CRISPR-Cas9 system could be used for programmable gene editing, an idea that has since been further developed by many research groups for potential applications ranging from creating smart model systems for fundamental protein research to enabling bio-engineers to modify crops and farm animals, and translational scientists to develop novel treatment approaches for inherited and acquired disorders for which curative treatment options are not currently available. 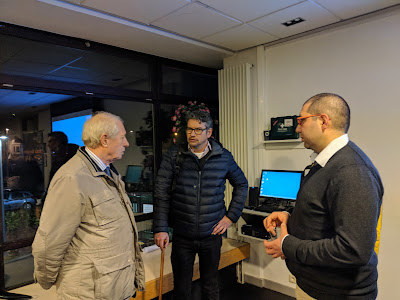 This fabulous CRISPR-Cas9 story provides the perfect example of how basic bacterial research has moved the whole scientific community towards the next biotechnological revolution and sparked an extended Q and A after the talk itself.

Charpentier at Louvain-la-Neuve
The title Doctors Honoris Causa will be awarded by the Universite Catholique de Louvain to Prof  Emmanuelle Charpentier of the Max Planck Institute for Infection Biology, Berlin, Germany for her discovery of the CRISPR/Cas9 genome editing system and to Prof Malcolm Bennett University of Nottingham, United Kingdom for his work on the root system of plants at a ceremony on 18 April.

The ceremony will take place at the UCL campus of Louvain-la-Neuve (Life Sciences Institute, ISV) on Wednesday April 18. For more information on this event and to register visit the UCL-ISV website.
Posted by RSC Belgium at 17:52 No comments: