Big Day Out at Dow

Glorious sunshine welcomed RSC Belgium members to the Dow Terneuzen plant on Saturday 21 May. They joined some 800 other interested members of the public who visited one of Europe's biggest chemical complexes during this open doors event.

Our visit started with registration at the plant entrance, including a fine bag of Dow goodies, before transfer to the Communications Centre and the opportunity to see a range of interactive exibits focusing on sustainable chemistry and applications in the home, work and play. 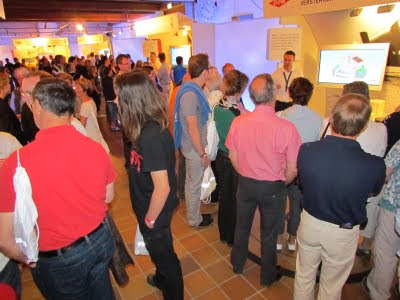 There was also a bouncy castle for the kids and some excellent Dutch coffee and top-notch buns. 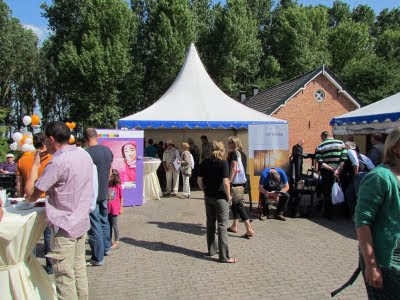 RSC member and Dow employee Carolyn Ribes (below, right) was our guide for a specially arranged anglophone coach tour of the huge plant at 11:00. The Terneuzen complex is massive covering some 440 hectares - equivalent apparently to 650 football pitches. The site's polyurethane plant is the largest in Europe. 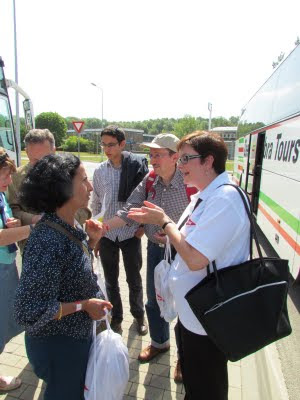 Ecological site
Carolyn described Dow Terneuzen as being "like a city" with its own fire and ambulance service, restaurants and many other services. But Dow also takes its ecological responsibilities very seriously too. Next to the site is a Natura 2000 site of special ecological importance and, uniquely in Europe, the site takes the waste water from the neighbouring town of Terneuzen, cleans it and uses it for process water before cleaning it again and passing it into the River Schelde - an excellent innovation that is a benchmark for future non-competitive water use. 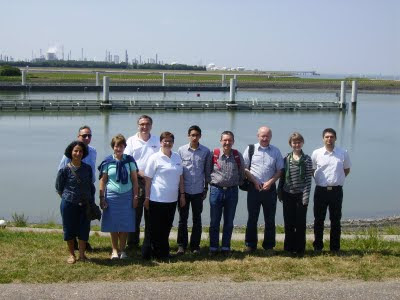 After the coach tour some mebers of the RSC party retired to the Brasserie Westbeer overlooking the Schelde in Terneuzen for a harty lunch. Some members of the RSC group (including Carolyn and her husband Al - also a Dow employee) are pictured outside the restaurant with the Dow plant in the background.
Posted by RSC Belgium at 22:36 No comments:

During the weekend of May 21/22 a number of chemistry related facilities - research laboratories and manufacturing sites - in Belgium will be welcoming the public as part of the International Year of Chemistry 2011. And in this spirit RSC Members and Friends will be visiting the major Dow plant at Terneuzen in the Netherlands on Saturday May 21.

The sites in Belgium which are open during this weekend are coordinated by Essenscia - the Belgian chemical industry organisation. Details of the facilities that are open and arrangements to visit can be found on their website.
Information on the sites is split liguistically on the website with arrangements for chemical facilties in Wallonia in French and those open in Flanders in Flemish.

Dow, Terneuzen
Thanks to RSC Member and Dow employee Carolyn Ribes, the section has a particular opportunity to visit the Dow manufacturing site at Terneuzen, in the Netherlands (below) during their Open Day on Saturday May 21. Terneuzen is situated on the south bank of the Schelt, about 50 km north of Ghent and around 75 minutes drive from Brussels. 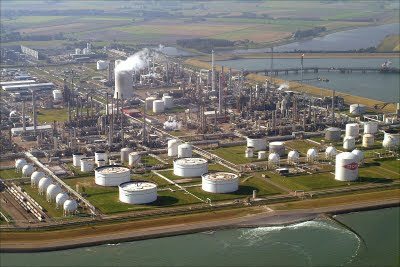 The site is constructed around three crackers which convert crude oil or LNG into basic chemical building blocks such as ethylene, propylene and butadiene which are then turned into plastics and basic chemicals. These go on to be transformed elsewhere into final products suich as packaging, electronics, toys, building materials, medicine or cosmetics.The site is particularly known for its sustainable operation, striving to improve energy efficiency, combat climate change and protect health and the environment.

The visit will include a gallery walk and exhibition about developments at Dow including their most innovative products and processes in the Communication Centre. There are many impressive developments moving from R&D labs into commercial use. This will be followed by a coach tour around the actual manufacturing site. Carolyn has arranged for the 11:30 bus tour to be in English. In total the visit should last two hours.

At the end of the visit RSC Belgium participants will head for lunch at the Westbeer restaurant on the waterfront at Terneuzen.

RSC Belgium treasurer, Rita Woodward, reports for RSC Belgium News on the Res Metallica Symposium on ‘The Periodic Table of Mendeleev’ that took place on Wednesday May 4 at the Katholieke Universiteit Leuven(KULeuven).

In 2011, scientists from every corner of the world are celebrating the International Year of Chemistry. Moreover 2011 marks the one-hundredth anniversary of the Nobel Prize in chemistry, awarded to Maria Sklodowska Curie for her groundbreaking discovery of radium and polonium.

So it was very appropriate that this year’s theme for the Res Metallica Symposium was the Periodic Table of Mendeleev. The meeting was held in the historic ‘Aula van ode Tweede Hoofdwet’ KU Leuven, Thermo-technisch Instituut on the Heverlee campus. This interdisciplinary symposium, introduced by chairman, Prof Patrick Wollants (Dept. of Materials Science, MTM) proved to be of great interest with over 500 people from academia and industry gathered together to hear about Mendeleev's periodic system and its relevance for material science. 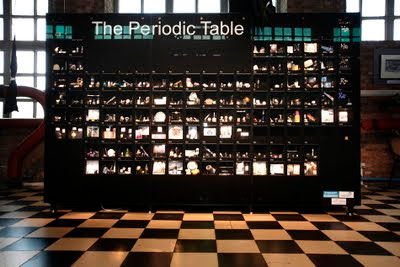 A significant highlight of the symposium was when, amidst a shower of sparks, a life-sized 'Table of Mendeleev’ in an up-to-date 3-D format was unveiled. The table (see above - photo (c) K.U.Leuven - Rob Stevens) consists of a total of 112 boxes containing the elements displayed as simple substances in their pure elementary state. 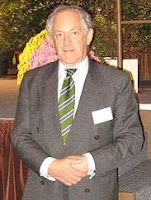 Keynote speakers at the symposium included Prof. Peter Atkins of Oxford University (left) the well-known physical chemist and author of numerous popular science tomes such as 'The Elements 'and chemical textbooks such as his classical 'Physical Chemistry'. He offered participants a seat at the periodic table and explored mathematically and visually the underlying role of symmetry as applied to hydrogenic systems in one to four dimensions. Atkins' talk was followed by the unvieling of the new periodic table.

Following this excitement Prof Eric Scerri from UCLA in California gave a talk encapsulating the twists and turns of history to reveal the story and the significance of the Periodic Table.

Following on, Dr Jürgen Gieshoff of Umicore presented an industrial insight into the use of certain elements of the Periodic Table as catalysts, promoters and storage agents in the quest for ‘clean’ technologies for the automotive industry. Maurits Van Camp also from Umicore addressed issues involved in exploiting ‘the urban goldmine’ to achieve a sustainable future based on metals that can be almost indefinitely recycled and reused.
Posted by RSC Belgium at 12:30 No comments:

For those who missed it the programme is repeated on Friday 6 May at 10:00 (Belgian time) or can be accessed via the BBC iPlayer now via the Desert Island Discs website. Kirsty Young's guest's choices ranged from Vaughan-Williams and Mozart to the Red Army Choir and he reflected on his career and life experiences. Prof Phillips also included Tom Lehrer's rendition of 'The Elements' - a very chemical composition. 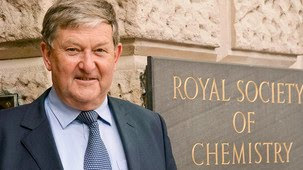 The section will be welcoming Prof Phillips (above) to Belgium in October. He will be giving us his reknowned demo lecture 'A Little Light Relief' on the evening of Thursday October 27 in Brussels (details tbc) and then participating in our event with Ghent University to present an International Chemical Landmark marking Kekule's research and teaching work in that city on 28 October.
Posted by RSC Belgium at 09:11 No comments: