RSC Belgium held its Belgian heat for the annual RSC Top of the Bench (TOTB) competition on Saturday 10 December at the British School of Brussels (BSB). It was a close competition between teams from BSB, St Johns International School and the European School II at Woluwe with a team from Woluwe edging the final result.

This was the first time RSC Belgium's TOTB eliminator was an actual 'head-to-head' competition. The five teams of budding chemists (two from Woluwe, two from BSB and one from St. Johns) had to complete a short written test on their individual chemical knowledge and data interpretation skils and then show teamwork and problem-solving abilities in a practical chemical exercise. 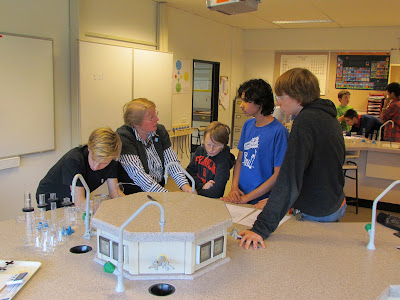 This format more closely reflects the format of the competition that the winners will face at the final to be held at Imperial College London on 31 March 2012. Rita Woodward devised the competition and set the questions.

Close competition
All five teams consisted of four students aged 14 - 16 and were accompanied by teachers. The practical aspect of the competition involved the reaction of sodium thiosulfate and hydrochloric acid. The teams had to determine the correct amount and molarity of solutions so that the reaction completed in exactly 2 minutes and 28 seconds. The reaction was said to be completed when a black cross placed under the reaction flask was no longer visible.

When teams had worked out their own solution, their eforts were timed by judges Prof. Bob Crichton and Dr. Ian Carson. Each team had up to two official 'timed' attempts.

The overall winners were determined by their placing in both written and practical parts of the 'eliminator'. 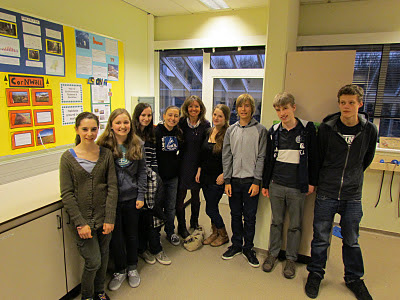 Although the result was tight the winning team and runners-up both came from Woluwe European School. The winning teams are pictured above, together with proud Woluwe chemistry teacher Julie Deegan. The school will now represent Belgium in the (inter)national final in London and receive the section's Keith Price Cup for 2012. All the students who took part in the competition will also receive certificates.

Everyone who took part in the competition had an enjoyable time with both students and teachers very enthusiastic about the new format. RSC Belgium looks forward to an even bigger and better Belgian TOTB eliminator next year.

Our thanks to all the teachers and students who took part in a fun afternoon of chemistry!
Posted by RSC Belgium at 11:26 No comments:

Over 250 schoolgirls from Brussels descended on the ISB for the second annual Greenlight@Brussels Day: an event that promotes science, technology engineering and mathematics ("STEM") to 11-15 year old girls. The RSC Belgium workshop was one of over over 100 hands-on workshops run by role-model scientists, engineers and technology experts, and a Fun Lab full of the latest high-tech gadgetry and science experiments, attendees were exposed to a wide array of exciting activities to inspire them to pursue technical studies and careers. The event was and official part of EU Robotics Week and the International Year of Chemistry 2011. 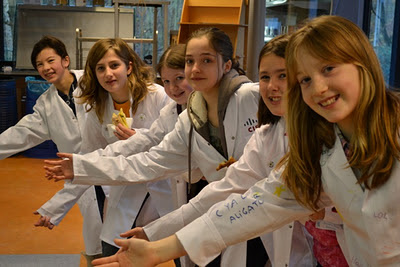 The RSC Belgium's four hour-long workshops involved the girls getting to grips with the IYC 2011 experiments on the 'pH of water' and how bugs and bacteria are eliminated from our drinking water. The results were added to the IYC 2011 global database of results.

Excellent impact
A follow-up survey to the event showed that it had a very positive impact with 94% of girls who attended saying that the event had encouraged them to pursue science subjects - including some who are not currently enrolled in science studies.

The RSC Belgum workshop global experiment was highlighted as a "favorite part of the day" by participants in their feedback.

The RSC Belgium team was led by Rita Woodward with fellow executive members Ian Carson, Elaine Francke and Tim Reynolds. Our special thanks to students Armourie Prentice and Katrien Laurier who completed the team.
Posted by RSC Belgium at 16:58 No comments:

A strong contingent of RSC Belgium members and friends were at the inspiring closing conference for the IUPAC/UNESCO International Year of Chemistry 2011 at the new Square Brussels Meeting Centre on 1 December. Leading figures from the international chemistry community gave their views on the importance of chemistry to solving major global issues, but perhaps the most inspiring visions came from a group of younger people.

The ceremony was opened by HRH Prince Philippe of Belgium and insprational messages were given by Christian Jourquin, CEO of Solvay, European Commissioner for Research Maire Geoghegan-Quinn and IUPAC President Prof. Nicole Moreau.

There then followed a presentation from 13 young leaders drawn from academia and industry around the world. They described their vision of the world in 2050 and how the chemical sciences will make it a better place by addressing the challenges that confront society today.

The vision was presented via three imagined scenarios that were very well thought out and delivered in a thought provoking manner.

A response to these visions was provided by Ada Yonath, 2009 Nobel laureate for chemistry and Jean-Luc Bredas, 1997 Francqui prize winner. Representatives from UNESCO, the OECD, and the Polish Minister Deputy Minister of Economy Hanna Trojanowska also took part in the event along with chief executives representing global chemicals and pharmaceuticals companies.

Outside the main auditorium a small exhibition area featured the life of Maria Sklodowska-Curie, the IYC Global Water Experiment, the Global Stamp Competition, Climate Change, 'Life without Chemistry' and the video 'Chemistry: All about you'.

A great success
The closing ceremony of the International Year of Chemistry was a great success. It was wonderful to see such interest in the creativity and the potential of chemistry to address the challenges facing our societies. High level speakers and young leaders explored and debated how chemistry is vital for solving our most critical global problems including food, water, health, energy, habitat, and more.

However IYC 2011 doesn’t want to stop and the chemistry community is looking to build on the ideas and momentum generated during 2011. More information on the 2050 vision can be found here and a Facebook page has been set up to continue the interaction.

The section's second Cafe Chimique of IYC 2011 focused on the Genetically Modified Organism (GMO) debate. Speakers from EuropaBio (Carel du Marchie Sarvaas) and Friends of the Earth Europe (Adrian Bebb) made short presentations on GMOs and policy developments in the green biotechnology area before entering into a spirited debate with an informed audience.

The debate took place on 24 November in a convivial cafe-style environment at AutoWorld, Parc Cinquantenaire in Brussels. Before and after the debate the audience had the chance to mix and discuss the GMO issue with drinks and light refreshment available.

To help us understand the issues, possibilities and policy pros and cons two distinguished speakers led the debate. 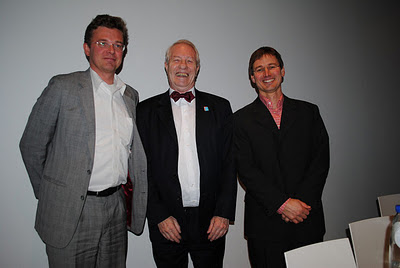 Adrian is a long-time FoE campaigner. He is now based in FoE Europe’s Munich office and is Food, Agriculture and Biodiversity Programme Coordinator. Previously he worked with FoE Europe as Agrofuels Campaign Coordinator and GMO Campaigner. Prior to joining the FoE Europe office he was co-ordinator for the Real Food Campaign for FoE UK.

Carel was appointed as Director for Agricultural Biotechnology at EuropaBio in April 2010. He is a Dutch national and has many years experience as a senior public affairs and communications advisor working in Brussels, The Hague and Washington DC. Prior to joining EuropaBio, Carel was Managing Director Public Affairs for Hill & Knowlton International in Brussels.

Hot debate
The two speakers both focused on the huge challenge facing humanity: how to feed 9 billion people and preserve the environment and biodiversity? Debate was heated on occassion with little common ground between the speakers and a wide diversity of opinion coming from the audience.