The Magic of Nanotechnology 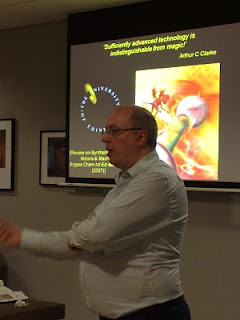 On April 29 a large number of members and friends were treated to an entertaining combination of nanotechnology and magic from Prof. David Leigh, FRS of Edinburgh University (pictured above).

Prof Leigh is one of Europe's leading organic synthetic chemists and has been investigating the synthesis of molecular machines since his serendipitous discovery of a one-step synthesis of a class of interlinked ring molecules called catenanes in the mid 1990s. As well as being a first-class chemist Prof. Leigh is also a full member of the Edinburgh Magic Circle and illustrated his chemistry with a number of 'top tricks'.

The event took place in the very swish 'Swoosh Lounge' at the British School of Brussels and was followed by light refreshments and an extended discussion. 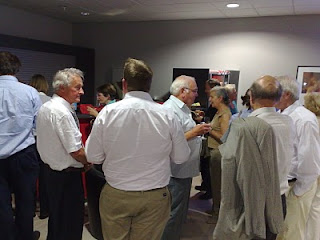