RSC Belgium held its first public event of the year on 25 January. Our latest Café Chimique tackled the issues around research into Stem Cell Therapy with two expert speakers, a patient viewpoint and many questions from an audience of over 60 RSC members and friends.

Stem cell therapy has been the source of both Nobel Prizes and much controversy over the past few years. It is the basis for a many new fields of medicine – most notably regenerative medicine – that offer hope for the alleviation and reversal of many critical degenerative conditions. It is also an area in which Europe leads the world in research, but in which regulatory issues abound.

A capacity crowd of over 60 RSC Belgium members and friends made their way on a snowy Friday evening to AutoWorld in Cinquantenaire Park, Brussels to hear from two expert speakers introduced by our chairman Bob Crichton (below, centre).

Our first speaker was Prof. Catherine Verfaillie (below, left) who is Director of the Stem Cell Institute at the Katholieke Universiteit Leuven (KUL). She was followed by Dr. Denis Dufrane (below, right) who works at the Faculty of Medicine, Universite Catholique de Louvain (UCL) at Woluwe. 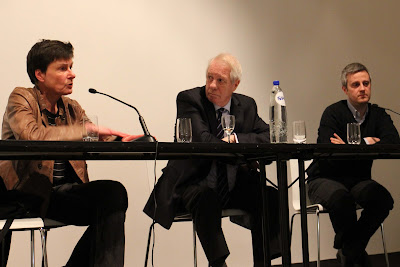 In addition a patient’s viewpoint was presented via a five minute video interview with someone participating in a clinical trial. This was particularly poignant as it highlighted the physical and emotional demands of the stem cell harvesting process.

Potential cure-all? There has been much coverage of the potential of stem cell therapy – but how much is hype and how much hope? Our two speakers took us through the ‘what and how’ of stem cells and the areas where they may have potential medical applications. These areas include insights into human development, drug discovery, the study of drug toxicity, the study of human diseases, cell therapy and tissue engineering.

Initial enthusiasm for stem cell therapy was focused on use of embryonic stem cells which do not age and have the potential to differentiate into all cell types and therefore could potentially heal all diseases. However there were and are many scientific and ethical questions around the use of such cells.

For these reasons research is now concentrated on adult stem cells which do age and did not have such a great potential for differentiation but through an intense global research effort it is possible to create cells that are nearly the equivalent of embryonic stem cells from any human cell. This work as opened the possibility of creating designer stem cells suitable for transplantation, tissue engineering and use in pharmaceuticals. 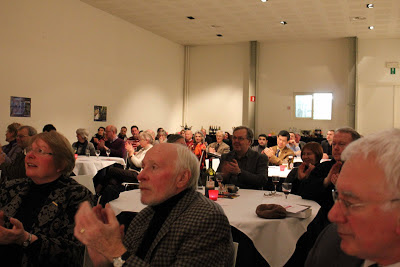 The Cafe Chimique format allows for an extended, informal question and answer session with the audience seated in small groups at tables. A gratis bar for wine, beer and soft drinks was open for participants throughout the evening and a variety of ‘nibbles and chips’ were also available on the tables.

2013 AGM Just prior to the Café Chimique the section held its Annual General Meeting where the formal business of approving reports and accounts were undertaken and elections held for the executive committee that guides the section’s activities.

Section secretary Tim Reynolds presented a report on RSC Belgium’s during 2012 and highlighted two particularly enjoyable and well-attended events: the June visit to the Royal African Museum and Tom Frantzen’s sculpture garden in Tervuren and the Higgs boson event in November with Prof. Vincent Lemaitre.

A vote of thanks was made to long time co-opted committee member Elaine Francke who had stepped down during the year and to Chris Phanopoulos and Laura Yonge who had both decided to not seek re-election this year. All three were thanked for their efforts for the section.

Our treasurer, Rita Woodward presented the financial situation of the section. During 2012 the section had made a surplus of over €4300, but it was pointed out that this included grants paid in advance for a delayed joint event with two UK sections (Kent and Chilterns & Middlesex). The section auditor, Ralph Palim, noted that he had found the accounts systematically prepared and in excellent order as usual.

Chairman Prof. Bob Crichton thanked all members of the executive committee during 2012 for their hard work and support during the year. He highlighted the contributions of Rita and Peter Woodward in providing the drinks and nibbles for many of the events during the year that added so much to the evening meetings.

If you would like to receive a copy of the draft minutes of the 2013 AGM and/ or any of the reports and other paperwork submitted to the meeting, please contact the section secretary Tim Reynolds via email.