RSC Belgium held its Belgian eliminator heat for the annual RSC Top of the Bench (TOTB) competition on Saturday 17 November at the British School of Brussels (BSB). It was a hard-fought struggle between teams from BSB, the European School II at Woluwe and European School I at Uccle. In a very close finish a team from Woluwe school eventually claimed the Keith Price Cup.

This was the second time that the RSC Belgium's TOTB eliminator has been held as an actual 'head-to-head' competition with a practical element. The seven teams of budding chemists (three from Woluwe, two from BSB and two from Uccle) had to complete a short written test on their individual chemical knowledge and data interpretation skills and then show teamwork and problem-solving abilities in a practical chemical exercise. 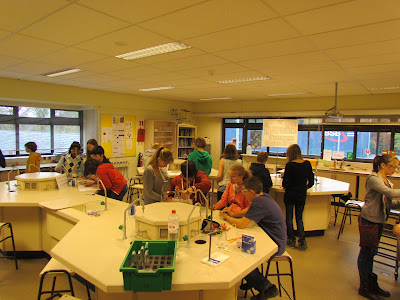 This format closely reflects the format of the competition that the winners will face in the final to be held in the UK (probably in London) in spring 2013. As usual Rita Woodward had devised the competition and set the questions.

Close competition All seven teams consisted of four students aged between 14 and 16 and were accompanied by teachers. The practical aspect of the competition involved a timed reaction involving alka-seltzer tablets and sodium hydroxide. The teams had to determine the correct experimental configuration to neutralise the alkaline solution in 45 seconds - the endpoint of the reaction being monitored by a universal pH indicator.

When teams had worked out their own solution, their efforts were timed by judges Prof. Bob Crichton, Dr. Ian Carson, Dr Becki Scott and Tim Reynolds. Each team had two official 'timed' attempts. The result was very tight with three teams (two from BSB and one from Uccle) tying for runner up position, but the winners were the ‘covalent’ team from the Woluwe European School. The winning teams are pictured above having been presented with the Keith Price Cup by branch chairman Prof Bob Crichton. The team will now represent Belgium in the (inter)national final in the UK in 2013. All the students who took part in the competition will also receive a certificate.

Clearly everyone who took part in the competition had an enjoyable time with both students and teachers very enthusiastic about this more competitive format. RSC Belgium looks forward to an even bigger and better Belgian TOTB eliminator next year.

Our thanks to all the teachers and students who took part in a really fun afternoon of chemistry!