The fabled Higgs boson certainly attracted a mass of people to the Brel theatre at the British School of Brussels (BSB) on 21 November to hear about the work of Prof. Vincent Lemaitre and the Large Hadron Collider (LHC) at CERN. Well over 70 members of the public and students heard about the theory behind the Higgs boson and the work at CERN that led up to the ‘discovery’ on 4 July this year of a new fundamental particle that is (very probably) the ‘Higgs’.

Prof Vincent Lemaitre is Director of the Centre for Cosmology, Particle Physics and Phenomenology at the Universite Catholique de Louvain (UCL) and is an enthusiastic ambassador for his science and his passion clearly engaged with the audience. 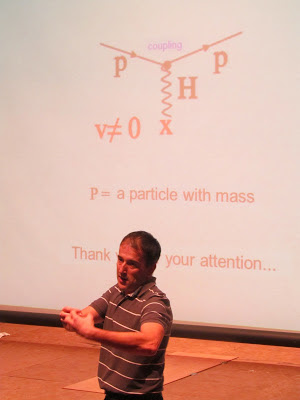 Prof Lemaitre took us through what was effectively a highly condensed but accessible course on particle physics and cosmology – or as he put it the study of the “infinitely big and the infinitely small.” We learned about the ‘Big Bang’ and that – thanks to Einstein’s famous E=mc2 equation - we cannot have mass without energy – however you can have energy without mass. He also pointed out that the most important effect of the Higgs boson was to impart mass to the electron – without it there would be no chemistry and no life as we know it.

Vincent took us through interactions, particles and fields to the work of Robert Brout, Francois Englert and Peter Higgs (two Belgians from ULB and one Brit at Edinburgh University), their establishment of the so-called “symmetry breaking” mechanism in Quantum Field Theory that describes all fundamental interactions of nature and implied the existence of an auxiliary particle came to be known as the Higgs boson and the search for that particle.

He is a collaborator on the Compact Muon Solenoid (CMS) detector at the Large Hadron Collider (LHC) in CERN and described its operation, the mechanisms of the CMS detector components and the difficulties in detecting evidence for the Higgs particle. 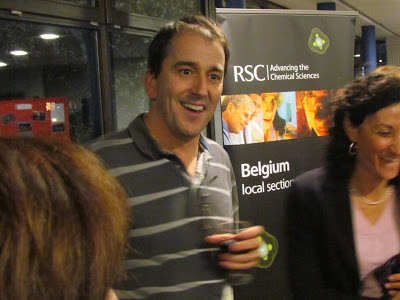 After the presentation Prof Lemaitre continued an animated question and answer session with a crowd of excited students and others. He was keen to impart that the discovery on 4th July was only the beginning and a good twenty years of further research would be needed to characterise the new particle and realise new physics. But this would be the work of the “next generation of scientists – you!”