RSC Belgium members were involved in two of the IYC 2011 Breakfast events held on 18 January under the theme: "Women Sharing a Chemical Moment in Time" . This global celebration brought together around 50 individual events across some 37 countries linking them together via social networking media including Skype and Twitter.

Edit Herczog is a Hungarian MEP who trained as a food conservation engineer and was a research fellow with the Hungarian Academy of Sciences.

Britta Thomsen MEP from Dennmark has extensive experience as a teacher and organiser of adult education. Mrs Thomsen is also the author of a European Parliament report identifying and suggesting solutions for the social, cultural and other barriers that account for the under-representation of women in science, entitled 'Women and Science’.

The breakfast conversation was recorded on video and you can watch it below or on the Chemistry Europe website.

Breakfast at Dow
At the same time Carolyn Ribes (below) of Dow Benelux was involved in organising a breakfast meeting at Dow's Terneuzen site in the Netherlands. 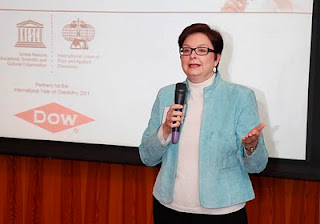 "The event was a a huge success," says Carolyn. "We had about 100 women and men in the audience and an excellent keynote address was given by Michelle Mes of Femco on Networking. She covered the benefits of building a network, tips on how to network, and differences between how men and women build networks. The breakout group discussions were lively and there was a lot of energy in the room." 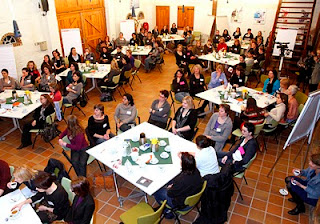 The event at Dow was clearly popular (see above) and this was refelected across the Netherlands. A report on actvities across the country can be found on the Dutch IYC website.

"Women Sharing a Chemical Moment in Time" was created to bring women in chemistry together to network, to celebrate the pivotal role of Marie Curie in chemistry, and to reflect on the current landscape for women chemists. By using modern communication tools a special moment of chemical time together was created enabling a global chemical handshake.

A great IYC blog
Talking of great communication tools one women Australian chemist, Magdeline Lum, has vowed to write a blog an interesting piece of chemistry every day throughout International Year of Chemistry. She is keeping up so far! Support her efforts at the chemistry 365 blog.
Posted by RSC Belgium at 17:53