“Colour is Fun” brightens up Brussels

In the first week of March, RSC Belgium organised for Andrew Hanson from the National Physical Laboratory in Teddington, U.K. to tour a number of schools and give a public presentation of his well-known lecture “Colour is Fun”. Andrew visited the European School Brussels II at Woluwe, St. John’s International School in Waterloo, the European School Brussels III at Ixelles, the British School of Brussels at Tervuren and the International School of Flanders (ISF) in Sint-Genesius-Rode, and gave an evening public presentation at the Université Catholique de Louvain’s Woluwe campus in Brussels on 2 March. At each location the lecture met with an enthusiastic reception from the audience, staff and pupils.

Andrew is Outreach Manager and Senior Research Scientist at the National Physical Laboratory (NPL), the UK's National Measurement Institute, and a world-leading centre of excellence in developing and applying the most accurate measurement standards available. For over 25 years he has been professionally measuring colour there, from evaluating the appearance of ornamental plants, to building the world’s first national standards telespectroradiometer to calibrate the colour of visual display units and a machine to measure the shininess of cats! 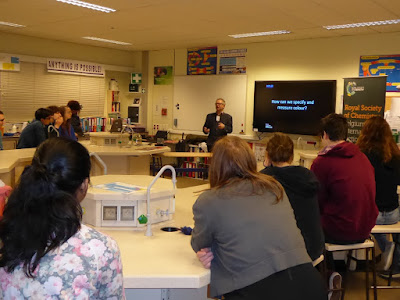 Colour measurement
His lecture tour brightened up a grey week at the end of winter for his audiences with its many colourful and animated slides. The lecture showed how colours are formed by splitting white light into the different wavelengths which we see as colour, how these are absorbed or reflected by the materials we see and the mechanism by which the eye transmits colour messages to the brain.

Equipment for colour measurement was described and how this enabled the definition of any particular colour, important for quality control in many different areas. Several demonstrations revealed how the eye can retain a reverse colour image when the image is removed – Andrew ‘magiced’ the Belgian flag from white, indigo and duck egg blue stripes. Drawing attention to how our perception of colour is determined by the surroundings of that colour, by the end of the lecture the audience was convinced that what had appeared to be four distinctly different colours at the start were in fact the same. 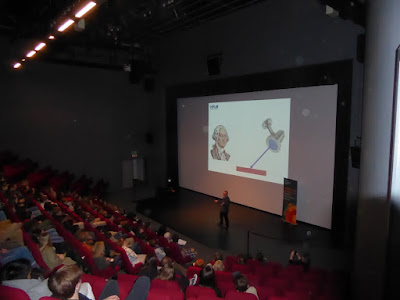 Whilst Andrew is a physicist, his lecture also highlighted the role of chemistry in determining the colour of materials, and in the development of new dyestuffs and colours.

Shiny cats!
And, yes, there was an image of a shiny cat! And do not be surprised if the next lecture makes reference to the colour of the Belgian chocolate which Andrew took home with him…
In total, the Andrew’s lectures were enjoyed by over 600 students, staff and members of the public. ISF have reported the event on their Facebook page.

We have to thank the NPL for making Andrew’s time available to conduct this lecture tour, and the staff members at the schools who organised the event on the ground.