The first recipient of the Dr Norman C Lloyd scholarship established by RSC Belgium at Cardiff University has now finished her first year. And she has passed the year with flying colours! 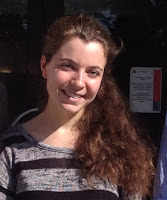 Dale Lyons (right) received the scholarship for 2014/2015 to help her in the first year of a four year Chemistry with a year in industry (MChem) degree programme. She is looking forward to her year in industry which she hopes will help her to decide which career path to take after her studies. Dale's favourite module in year one has been Solid State Chemistry.

Dales says that receiving the scholarship "has made a massive difference.  I have been able to buy textbooks rather than wait for them to be available in the library which has helped a lot with revision. Having the scholarship has motivated me throughout the year to do well and eased some of the pressure in terms of worrying about money.  Thank you so much."

Clearly the support of the scholarship has been very useful and Dale has received a first-class honours for her first year of study at Cardiff. Well done Dale!

In the Autumn a new first year student will been selected to receive the 2015/2016 scholarship.


The scholarship
The Norman Lloyd scholarship was set up by RSC Belgium in collaboration with Norman’s family and the university in memory of our old friend and supporter Norman Lloyd. Norman was himself a student at an institution that is now part of the university. The funds raised provide an annual scholarship of £1,000 for an undergraduate student, usually in their first year of study, at the Cardiff School of Chemistry.

You can find out more about the Cardiff University scholarship here including how to donate to the fund.
Posted by RSC Belgium at 19:10