Constraining the Origin and Evolution of Life

On 2 October RSC Belgium was proud to present a fascinating talk on the Bioenergetic Constraints on the Origin and Evolution of Life from Dr Nick Lane of University College London. The event was also the prize giving ceremony for our 2014 Chemistry Challenge.

Nick Lane is an evolutionary biochemist and writer in the Department of Genetics, Evolution and Environment at University College London (UCL). He was awarded the inaugural UCL Provost's Venture Research Prize for his research on evolutionary biochemistry and bioenergetics and his current work focuses on the origin of life, and the origin and evolution of eukaryotes. He was a founding member of the UCL Consortium for Mitochondrial Research, and leads the UCL Research Frontiers Origins of Life programme.

Common ancestor
All complex life on Earth is eukaryotic, and all eukaryotes (the cells found in plants and animals) share a common ancestor that was already a complex cell explained Nick. Despite their biochemical virtuosity, prokaryotes (cells found in bacteria) shown no tendency to evolve eukaryotic traits or large genomes over the huge timescale that they have existed. 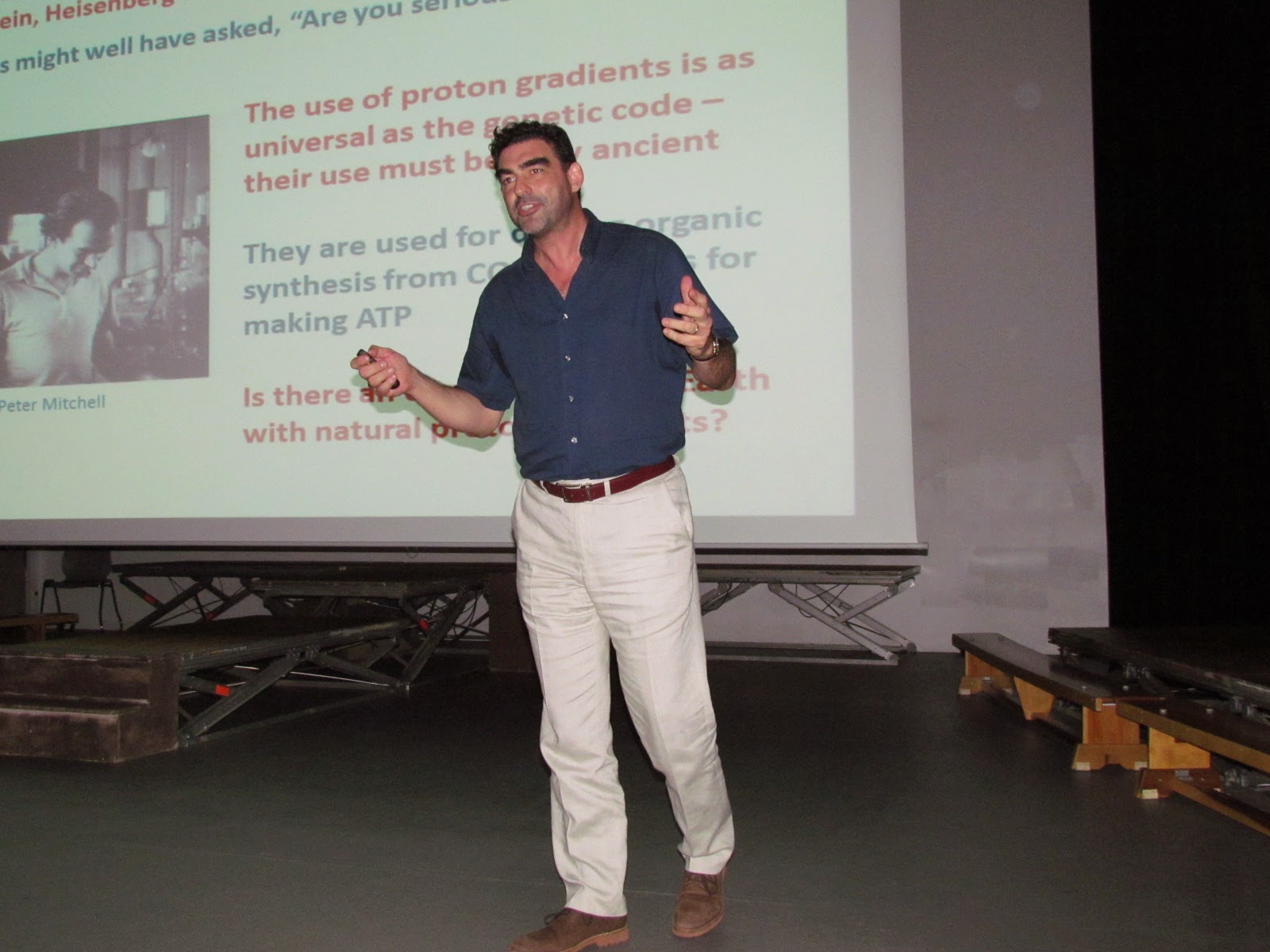 Nick (above) argued that prokaryotes are constrained by their membrane bioenergetics, for fundamental reasons that stem from the very origin of life. Eukaryotes arose in a rare symbiosis between two prokaryotes, which broke the energetic constraints on prokaryotes and gave rise to mitochondria - often described as power plants for our cells. Loss of almost all mitochondrial genes produced an extreme genomic asymmetry in eukaryotes, in which tiny mitochondrial genomes support, energetically, a massive nuclear genome, giving eukaryotes 3 to 4 orders of magnitude more energy per gene than prokaryotes. The requirement for endosymbiosis radically altered selection on eukaryotes, potentially explaining the evolution of unique traits, including two sexes, germline, speciation and ageing.

As our audience appreciated Nick is an excellent communicator and the author of three critically acclaimed books on evolutionary biochemistry, the most recent of which, Life Ascending, won the 2010 Royal Society Prize for Science Books. His other two popular publications are ‘Power, Sex, Suicide’ and ‘Oxygen’. Our friends at Waterstones bookshop were present for the post talk drinks and networking with copies of Nick's books for sale. They also took some excellent photos!

Keith Price Prize
Before the lecture the highest scoring entries in our 2014 Chemistry Challenge were presented with their prizes. This year John Eade of BSB (pictured below right with section chairman Prof Bob Crichton) received the Keith Price Prize for best overall score in sections A and B (the two more chemically-orientated elements of our three-part challenge). For the three individual sections first prize winners received a €50 cash prize, second places got €25 and third places €10 with the winner of the Keith Price Prize receiving an additional €100. 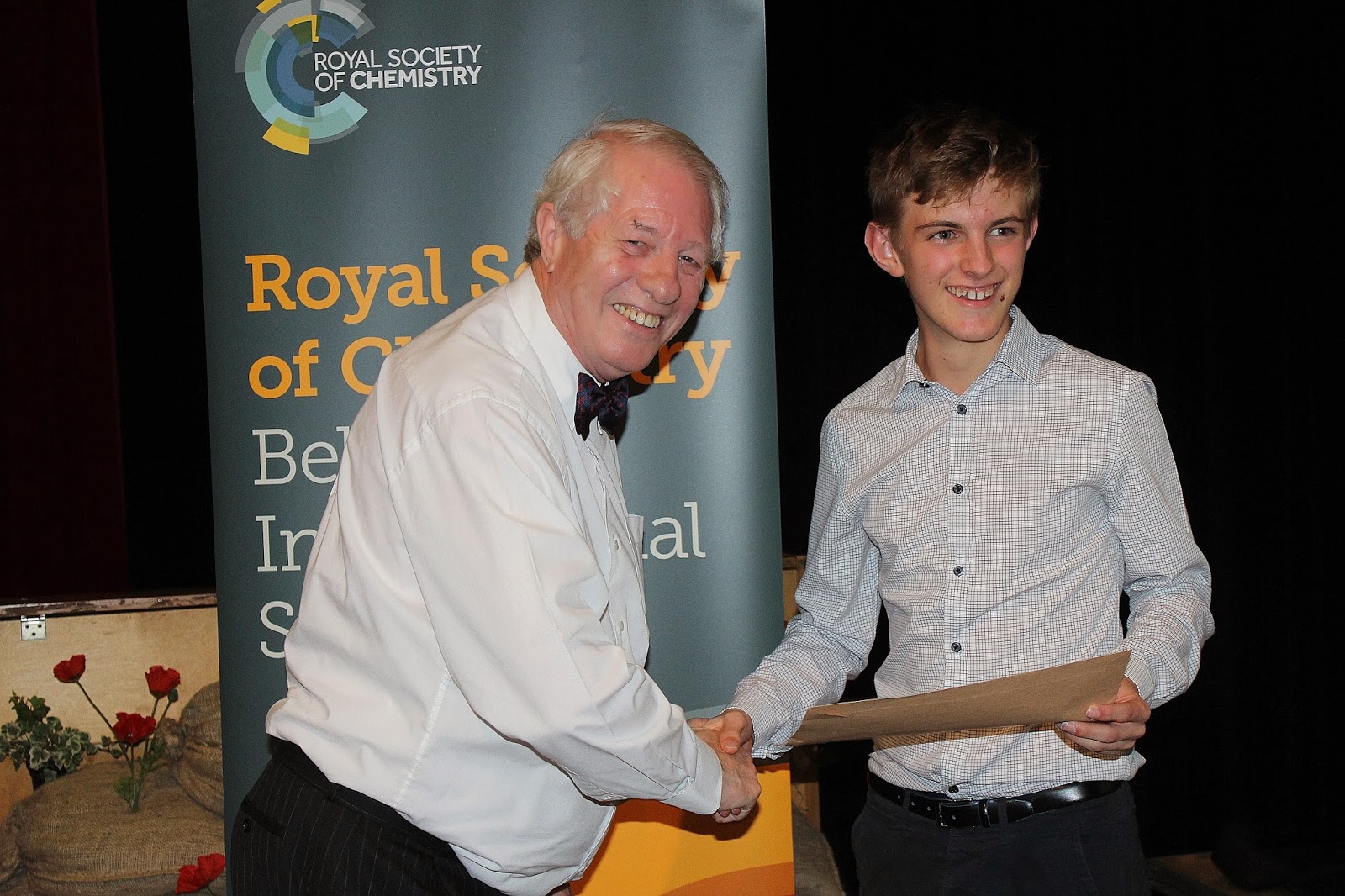 Well done to everyone who took part! Every student that entered the competition received a certificate of participation. We will be running the Challenge again in 2015. And look out for our Top of the Bench International eliminator coming soon!
Posted by RSC Belgium at 21:57