held its first ever ‘international’ eliminator heat for the annual RSC Top of the Bench (TOTB) competition on Saturday 23 November at the British School of Brussels (BSB). As ever it was a hard-fought struggle between a total of 12 teams from eight schools including three schools competing for the very first time. In a very close finish the ‘Bromine’ team from the of claimed the Keith Price Cup and the right to represent in the 2014 final!

This was the third time that the 's TOTB eliminator has been held as an actual 'head-to-head' competition with a practical element and the popularity of this format is clearly growing. In addition to welcoming three new schools to the competition – including one from – the section also welcomed coordinator for the Top of the Bench competition , who came over from the to help with the judging and see how we ran our eliminator.

The full team line up was as follows:
For the , the International School of Flanders and this year was the first time they had competed in our eliminator.

Foaming conkers
The twelve teams of budding chemists had to complete a short written test on their individual chemical knowledge and data interpretation skills and then show teamwork and problem-solving abilities in a practical chemical exercise. 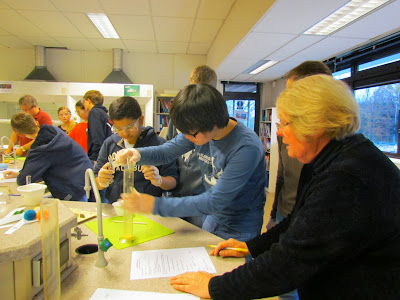 This year the test involved the use of conkers! The teams were set the task of preparing a detergent from saponin – a component of conkers – and then produce a certain volume of chemical foam using a detergent mixture, bicarbonate of soda and a minimum volume of lemon juice.

Teams were judged on their approach to the problem, teamwork, the quality of the recording of their work and the accuracy and precision of their observations.

This format closely reflects the format of the competition that the winners will face in the actual –run final. As usual devised this cunning competition and set the questions.

Close competition
All twelve teams consisted of four students aged 14 - 16 and were accompanied by teachers. When teams had worked out their own solution, their efforts were timed by judges Prof. Bob Crichton, Dr. , Dr Becki Scott, Sue Thompson and Gavin Brown. 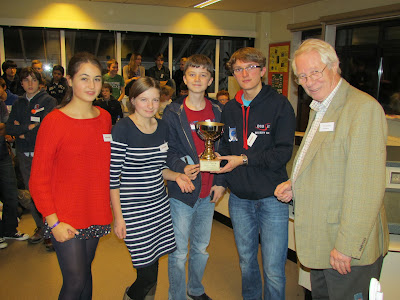 The final result was very tight with the winners being the Bromine team from , followed by the Argon team also from and in third place Nitrogen from newcomers St Georges International School in . The winning teams are pictured above having been presented with the Keith Price Cup by branch chairman Prof Bob Crichton. The team will now represent in the (inter)national final in the in 2014. 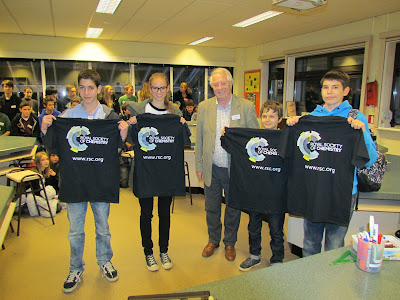 In addition the Nitrogen team (above) from received tee-shirts as they came top in the written part of the competition. All the students who took part in the competition will also receive certificates.

Clearly everyone who took part in the competition had a very enjoyable time with both students and teachers very enthusiastic about this competitive format. looks forward to an even bigger and better Belgian TOTB eliminator next year.

Our thanks to all the teachers and students (see below) who took part in a really fun afternoon of chemistry! 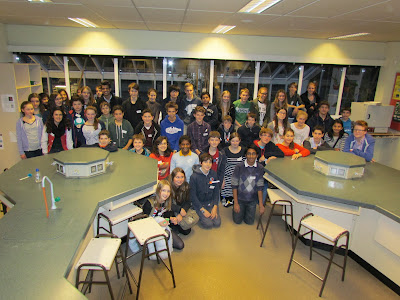