Students from four schools in and around Brussels were left open-mouthed as Prof István Markó and his assistant Fabio Lucaccioni performed their chemistry demonstration lecture “Chemistry and Energy – a Tasty Marriage” at the Université Catholique de Louvain (UCL) site in Woluwe, Brussels on Tuesday March 20th. Two lectures were organised on the day by the RSC Belgium Section in cooperation with Scienceinfuse based at the UCL main campus at Louvain-la-Neuve.

The students, from St. Johns International School, Waterloo, the Verseau International School at Bierges, the Institut Maris Stella at Laeken and the European School Brussels II at Woluwe watched enthralled as Prof. Markó worked through over an hour of about 20 reactions involving flames, colour changes and explosions. 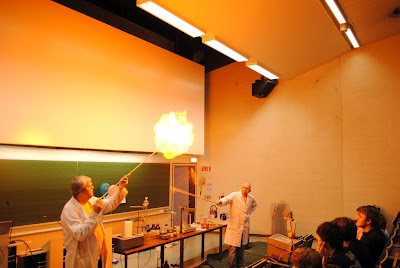 Following Prof. Markó’s advice the students kept their mouths open to equalise the pressure in their ears during the more substantial bangs. A volcano spluttered, photo flash bulbs were simulated, the heat from a ball of flame caused by burning hydrogen in a balloon was felt by the students in the front rows (see above), and a black serpent rose out of a beaker containing only sugar and battery acid. The students oohed and aah’d as blue luminescence spread downwards in a glass tube demonstrating energy generated in a cold reaction.

Enthusiastic response
Prof. Markó engaged his audience with commentary on the chemistry behind the reactions, and his steady repartee – untrammelled by current notions of political correctness – aimed to challenge their ideas and make them think ‘outside the box’. By the end of the lecture though, he had smoke coming out of his nostrils - from eating a Belgian waffle dipped in liquid nitrogen!

After the event, one teacher commented: “Our students were full of enthusiasm and excitement when they got back to school and enjoyed every aspect of the lecture”.

The demo lecture was repeated to a French-speaking schools audience at UCL at Louvain-la-Neuve on Thursday March 22nd in the afternoon and to a public audience on that evening. On both occasions the 500 capacity auditorium was packed. The total audience for all four shows was in excess of 1200.

TOTB cup presented
At the start of the afternoon lecture at Woluwe the winning team in this year’s RSC Belgium local ‘national’ eliminator of the RSC Top of the Bench (TOTB) Competition was presented with the Keith Price Cup. The winning team from European School Brussels II at Woluwe are pictured below with their teacher Julie Deegan and RSC Belgium Section Chairman Prof. Bob Crichton. The Woluwe team will represent RSC Belgium at the RSC UK final of TOTB at Imperial College London that takes place on Saturday 31 March. We wish the team good luck for the competition and will report on how they get on in London.

The RSC Belgium TOTB Cup has renamed as the Keith Price Cup last year in honour of our first Chairman and principal "founding father" of the section.

A complete list of the experiments performed during our 2012 demonstration lectures is available on request from RSC Belgium’s Schools Coordinator Rita Woodward.
Posted by RSC Belgium at 09:38