RSC Belgium achieved another first on 28 October with the presentation of a RSC National Landmark plaque to Ghent University. The plaque commemorates the work of Prof. August Kekulé who worked at Ghent from 1858 to 1867. 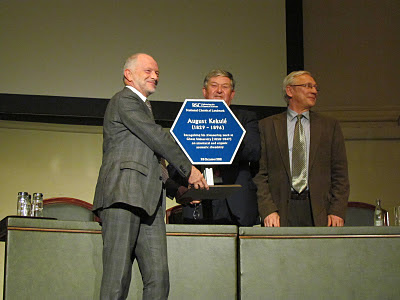 During the ceremony an account of Kekulé's time at Ghent and its context in the history of chemistry was given by Dr. Brigitte Van Tiggelen, Chair of the Belgian National Centre for the History of Sciences.

This was followed by a contribution by Prof. Alexander Filippou from Bonn University on behalf of the German Chemical Society (GDCh), the presentation of the plaque itself and a closing presentation by Prof. Pierre De Clercq on the actual siting of Kekulé's laboratory itself.

Many artefacts and pieces laboratory furniture, including original molecular models, Kekulé's chalkboard and lab benches, are displayed at Ghent University's Museum of Science.

Kekulé at Ghent
August Kekulé (1829 - 1896) was one of Europe's most prominent chemists during the second half of the 19th century and his work forms one of the principe foundations of the theory of chemical structure. From 1858 - 1867 Kekulé was professor of chemistry at Ghent University and whilst there he experienced his famous 'benzene dream' from which he deduced the structure of benzene and effectively initiated the development of organic aromatic chemistry, its industrial application and the modern world of plastics and polymers. 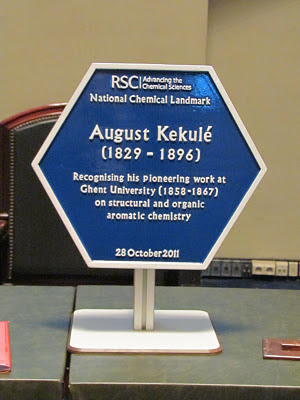 The wording of the landmark (above) highlights Kekulé's achievements at Ghent - arguably the best work of his long career. The laboratory that he created in the university marked the establishment of chemical sciences and industry in Belgium and inspired future generations of Belgian chemists. The building that housed Kekulé's original laboratory remains part of the University in the centre of Ghent and will be the final site of the landmark.

The International Year of Chemistry 2011 is an appropriate time to honour Kekulé as it also marks the 150th anniversary of the publication of his landmark text book on organic chemistry - 'Lehrbuch der Organische Chemie' - in 1861.

Ghent sites
A reception followed the ceremony. Earlier members of RSC Belgium and the speakers were given a guided tour of some sites in Ghent associated with Kekulé's time there. 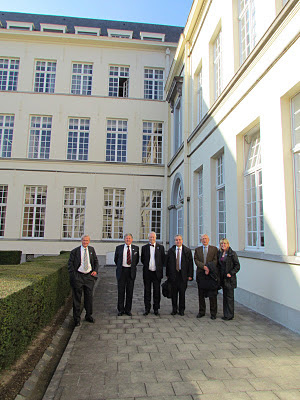 Pictured above in front of the building where Kekulé's laboratory was believed to have been situated - possibly where the open window can be seen - are (above from left to right): Dr. Ian Carson, RSC Belgium Secretary; Prof. David Phillips, RSC President; Prof. Bob Crichton, RSC Belgium Chair; Prof. Alexander Filippou of Bonn University and GDCh; Prof. Pierre De Clercq of Ghent University; and Pauline Meakins of RSC HQ.
Posted by RSC Belgium at 09:36