Girls get greenlight for chemistry!

RSC Belgium got cooking with chemistry for over 200 girls at the Greenlight4Girls event at the International School of Brussels on 20 November. This all-day Saturday event brought together young women aged 11 - 16 from all the language communities in Belgium to get a taste of science, engineering, ICT and above all fun.

The RSC Belgium team held four Culinary Chemistry workshops. Each workshop took around 45 minutes and involved some hands-on experiments incorporating elements of the RSC Culinary Chemistry Resource pack and some 'cheese-based' ideas from the ACS's 'Get Cooking with Chemistry' booklet. 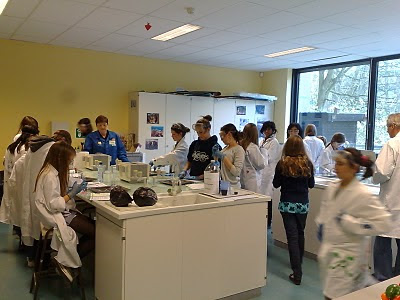 The experiments were described, developed and tested by RSC members Rita Woodward and Carolyn Ribes. Every participant took home their own workbook, RSC stickers and pens plus some tasty recipes for cheesy treats to try out at home. Two workshops were delivered in English, one in French and the fourth in Dutch. In total over 50 girls got cooking with chemistry.

Chemistry is magic
As well as cooking with chemistry, Profs Bob Crichton and Bobbie Ward gave a couple of workshops that combined top magical illusions with some chemical tricks to demonstrate molecular magic featuring liquid nitrogen and solid carbon dioxide.

Chemistry was also well represented in the workshops with contributions from the Belgian Chemical Industry organisation Essenscia and Belgian pharmaceutical giant Janssen Pharmaceutica amongst others. GSK Biologicals provided all the girls (and workshop leaders) with their own labcoats that the girls decorated during the event and took home with a bag full of other goodies at the end of the day. 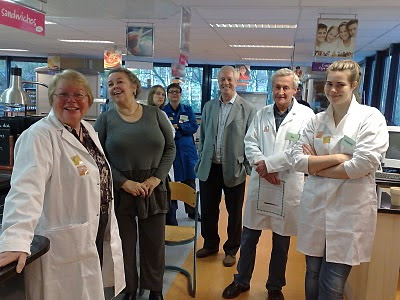 Greenlight4Girls is an international organisation and social initiative dedicated to promoting science, engineering and all things 'geeky' to girls and young women. Its mission is to encourage young girls of all ages to consider a future in maths, science, engineering and technology by introducing them to the world of science in fun and exciting ways. More events in Belgium (and elsewhere) are on the drawing board and RSC Belgium is planning to remain involved and support this exciting initiative.
Posted by RSC Belgium at 09:17