During International Year of Chemistry 2011 RSC Belgium had been extremely active: organising 12 events directly and participating in the organisation of a further five. The two Cafe Chimiques on Climate Change and GMOs and the Landmark Ceremony for Kekule in Ghent represented new highs for the section. Details of all events can be found in articles published on this blog throughout 2011. For RSC Belgium IYC2011 had been a great success!

It was noted with sadness that 2011 had also seen the death of Keith Price, who had been instrumental in setting up the section.

Dr Paul Gray had also returned to the UK during 2011 and his significant contributions to the section were also noted. The meeting also extended their congratulations to committee member Laura Yonge who had given birth to her daughter Eloise in October.

The meeting reappointed Ralph Palim as auditor. Ralph was thanked for his helpful comments and efficient auditing of our finances once again.

Long service rewarded
The meeting closed at 20h10 and members rejoined partners, colleagues and friends for the section's Annual Dinner. 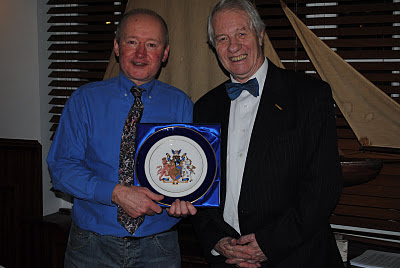 During the meal Tim Reynolds was presented with a RSC Long Service Award by section chairman Bob Crichton (see above). Long Service Awards are presented to members who have served a total of 10 years on a local section committee and held an officer (chair, treasurer or secretary) position during that time. Tim is returning to the role of secretary for 2012 having held that position for six years during a previous 'stint'.

If members would like a copy of the Secretary's report, the treasurer's report or the financial statements presented at the AGM, please contact section secretary Tim Reynolds.
Posted by RSC Belgium at 21:49 No comments: