Thanks to Giulia Greed from the European School Brussels II in Woluwe for writing up her Top of the Bench (TOTB) experience for us. 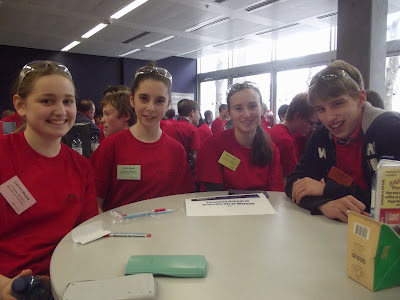 The Scientists (Giulia, Caitriona, Nora, and Thomas - see above) met up with Mrs Deegan at around midday, at Gare du Midi, where we would take the Eurostar to London. Once we had arrived in London, Mrs D bought us underground tickets, and we left for our hotel, which was directly opposite Hyde Park.

We settled in, had a short rest, then we set off again - to Leicester square, to buy tickets for the theatre. We looked at the available shows, and we decided on one of them. Mrs D returned from the ticket booth, clutching the Wicked tickets. The Scientists were all getting hungry, so we went for a meal near Covent Garden, then for an ice cream. Next, we went to the theatre to see Wicked, which was really good. Afterwards, we took the Underground back to the hotel, and then went to sleep.

The next morning, we had breakfast, got ready, then we then left the hotel and set off walking through Hyde Park, to Imperial College (where the competition was being held). While we were walking, Mrs D tested the Scientists and talked to us on chemistry.

Brussels crew
Once we were at Imperial, we were talked through the safety announcements, and soon afterwards we were ushered into a lecture hall, where we would be having the written exam. It only lasted half an hour, then we all had a snack.

Next, was the practical team exam, so we went into the labs. The judges explained: the envelope on the table contained the first challenge. The papers on the side made up the second challenge. Everything we needed was in our workspace. We were given lab coats and gloves. We were known to the judges as “the Brussels crew”.

After the first challenge, we had a one minute break. Then the judges described the second challenge. Both challenges went well. After that we ate lunch, followed by a short break, and then the scientists attended a short lecture on the chemistry in mobile phones.

Next: the award ceremony. Our team came 14th out of 30 - a result we were very pleased with!

RSC Belgium was represented at the RSC's Top of the Bench (TOTB) final on 31 March by European School Brussels II at Woluwe (see team photo below). The winners of our own 'national' competition and holders of the Keith Price Cup had a great time at Imperial College London and secured an excellent 'mid-table' result.

"The team came 15th out of around 30 competing schools," reported Julie Deegan, the team's teacher and head of chemistry at Woluwe. "The higher placed teams were all prestigious UK grammar or private schools." 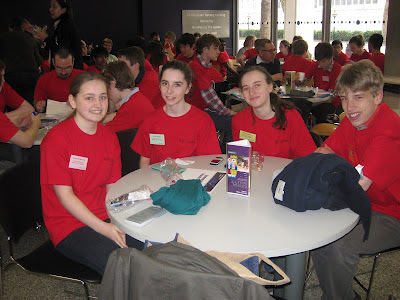 In the highly competitive final each student had to sit an individual written test designed by the RSC and together each team carried out two practical activities: one set by RSC and the other by Imperial College staff.

"The students thought the written test was very traditional and GCSE-like," says Julie. "Questions about the Haber and Contact process, and others about recalling the chemical symbols for less well-known elements were not so popular with our students!"

Practical posers
This year's RSC Belgium eliminator had, for the first time, included a practical element, so the problem-solving laboratory element of the final was not a surprise to the Woluwe team. "The practical task was in two parts," continues Julie. "The first to identify three unknown liquids or solutions using no additional reagents. The second part was a titration, for which the older students had to take a leading role." 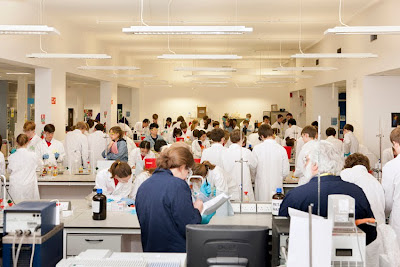 Chemistry Challenge
The next major schools' activity for RSC Belgium is about to commence: the Chemistry Challenge. The papers are being printed for distribution to participating schools. This individual chemistry puzzler is open to 16-17 year old students and we hope to involve well over 100 students in this year's competition.