2018 Belgium Top of The Bench results

Our annual 'international eliminator' for the Royal Society of Chemistry's Top of the Bench (ToTB) competition was held at the British School of Brussels (BSB) on Saturday 18 November 2017 with ten teams from six schools taking part. An exciting afternoon of chemical problem solving ended with the announcement of the 2017 winner of the Keith Price Cup: Team Selenium from BSB. They will now represent RSC Belgium at the TOTB grand final in the UK in 2018.

As ever our TOTB eliminator was a close run competition with only a few marks between the top four teams on the individual written quiz components and five out of the ten competing teams correctly classifying the three mystery solutions in our 'Can you tell your acid from your alkali' practical challenge. 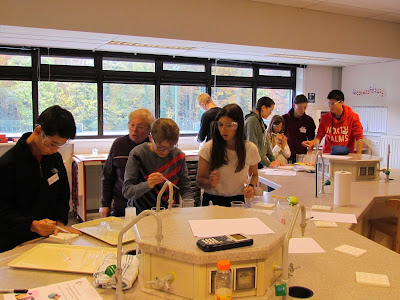 Wining formula
The teams completed individual written question papers and then enjoyed a challenging team Practical Problem Solving Exercise. As usual both the 'hands-on' practical and the paper-based component were developed by our resident competition guru, Rita Woodward. The competition was designed to really test the teams’ chemistry knowledge and problem-solving abilities and (hopefully) encourage young talented chemical scientists to consider further education and careers in Chemistry.

The individual scores from the written paper were added together for each team with the placings from the practical to give an overall score with BSB team Selenium coming out on top just a head of Team Vanadium from St. Johns International School (St John’s) in second place and Team Strontium from European School Brussels 2 (EEB 2).

Members of the winning team (pictured below with Rita) each received a RSC heat sensitive mug and the school will hold the TOTB Keith Price Cup during 2018. All the student participants will receive a certificate. 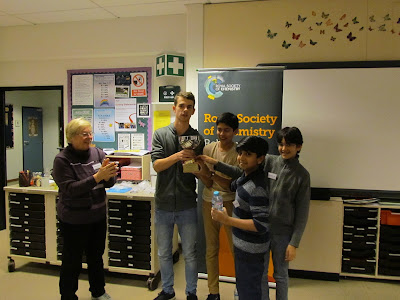 Our huge thanks to all the teachers and other volunteers involved to prepare and organise the event, in particular William Darnley and Luke Stagno Navarra from BSB, and, of course, Rita.

The full line up of participating teams for the 2018 competition was:

The TOTB Finals will take place in the UK on Saturday 3 March 2018 at Birmingham University (TBC) and RSC sponsors the travel arrangements for our winning team. The RSC Belgium team is usually the only competing school team not based in the British Isles.

Our next TOTB Eliminator Round will take place in Q4 2018. Get your school involved!
Posted by RSC Belgium at 23:16 No comments: