On Friday 23 February, RSC Belgium was delighted to host an informal evening with Professor Sir Martyn Poliakoff. The event took place at the British School of Brussels and was a hugely informative and entertaining soiree with one of Europe's most eminent chemists and science communicators. 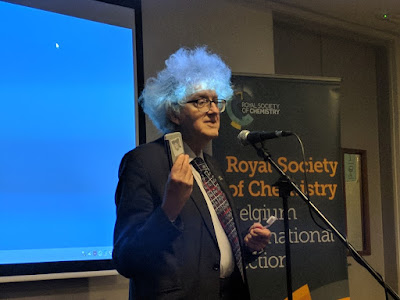 Staged in a Cafe Chimique style, with refreshments available throughout the evening, Prof Poliakoff first gave a short talk on his work and career covering his research interests focused on supercritical fluids, continuous reactions and their applications to Green Chemistry.  He also talked about the Periodic Table of Videos, which he hosts. 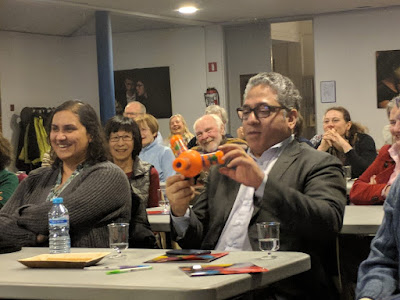 Prof Poliakoff then answered questions from the audience for over an hour before further informal questions at the end. Our audience for the evening ranged from six to seventy and an excellent time was had by all.

During the evening we took a collection to support our Norman Lloyd Scholarships at Cardiff University and raised a further EUR 200 for the fund. Many thanks to all who contributed. 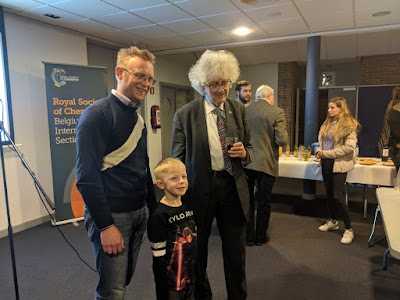 About Sir Martyn
Sir Martyn Poliakoff CBE FRS FREng studied at King's College, Cambridge, gaining his Ph.D. in 1973 on the Matrix Isolation of Large Molecules. Following time at the University of Newcastle he joined Nottingham University in 1979. He is Honorary Professor of Chemistry at Moscow State University. He is a Fellow of the Royal Society, the RSC and the IChemE and was awarded CBE in 2008 for "Services to Sciences", and knighted in 2015 for "Services to the Chemical Sciences". He was Foreign Secretary and Vice-President of the Royal Society from 2011 to 2016.

A taster for the Periodic Table of Videos is below - featuring Hydrogen.