Cold plasma is a hot topic

The final RSC Belgium lecture event of 2010 was held on Thursday November 18 at the British School of Brussels with Dr. Laurent Denis from the University of Mons. Dr. Denis presented a comprehensive overview of the use of cold plasma technologies - in particular for the application of thin films.

Plasma is a state of matter that makes up in excess of 90% of all matter in the universe. Plasma is essentially a fully ionised gas: the Sun is a ball of plasma. Cold plasma technology has a vast number of applications and is the basis of a multi-billion euro materials industry in Europe. 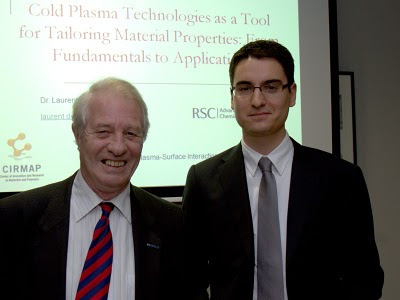 Dr. Denis (pictured above with section Chairman Prof Bob Crichton) described how cold plasma processes have been developed specifically and purposefully based on their non equilibrium properties and their capabilities to initiate chemical reactions in the gaseous phase at relatively low temperatures (i.e. at room temperature). Although these applications are widespread and involve in many application fields, the main part of Dr. Denis' talk focused on the deposition of thin films where the thickness of the films are between a few micrometres down to a few nanometres.

The majority of the methods described led to material coating applications and the use and performance of these films were illustrated by concrete examples such as self-cleaning windows. Other plasma applications were briefly reviewed ranging from surface functionalisation and etching to sterilisation and medicinal uses.

Examples given by Dr. Denis included coating of orthopaedic prostheses, low-emissivity glass, silicon coating of plastics and a method to enhance dispersion of carbon nanotubes in polymer matrices. The lecture inspired a lively discussion with the audience of over twenty members and friends. The lecture took place in the Swoosh Lounge at BSB and was followed by further discussions over drinks and nibbles.

Current research
Dr. Denis current research is on the study of plasma-enhanced chemical vapour deposition processes to improve the barrier properties of commercial food packaging to oxygen and water at the University of Mons.

He received his PhD from Mons in 2009 with a thesis entitled the 'Influence of the Precursor on the Synthesis Mechanisms of Primary Amine-based Plasma Polymers: From Plasma Diagnostic to Film Chemistry and Applications'. He has also published seven scientific papers as primary author and made twelve contributions to international conferences.
Posted by RSC Belgium at 10:49 No comments:

Rita gets her reward

On 12 November RSC Belgium member Rita Woodward received a Royal Society of Chemistry Award for Service, which recognises outstanding non-academic service to the work of the RSC. 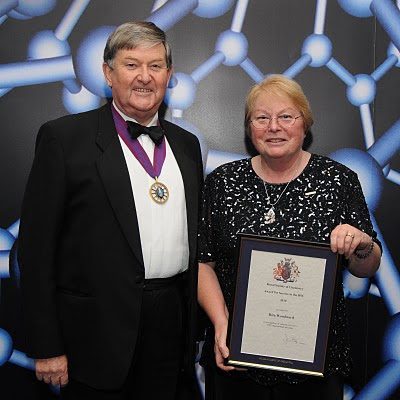 Rita was presented with her award by RSC President Prof David Phillips (see above) at a glittering dinner event during the RSC's General Assembly in Birmingham on November 12 2010. She was nominated for the award by our section Chairman Prof Bob Crichton who was there to help her celebrate the achievement. The award comprises a certificate and a fine glass trophy (see below).

Dedication
Rita has been a long serving and active member of the RSC Belgium executive committee since the very beginning of the section. She has also held the posts of section chairperson and treasurer. But her lasting and most obvious contribution to the section has been her devotion and dedication to the section's outreach and activity with schools and younger people. 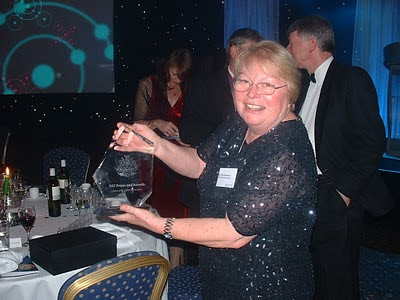 As well as inspiring generations of chemists as Head of Science at the British School of Brussels (BSB), Rita has been the mainspring behind the section's Top of the Bench efforts, school essays and poster competitions. In fact despite retiring in 2005, she has become even more active in this area recently. Her latest brainchild was the 'Chemistry Olympiad' competition that was piloted this year in a number of schools and has been a great success. And she was a main driver for the RSC Belgium contribution to the Greenlight for Girls event earlier in November.

Congratulations to Rita!
Posted by RSC Belgium at 17:24 No comments: