Catalysis and culture in Leuven

We gathered under clear and sunny skies (thanks to that Icelandic ash cloud) in the car park at Kasteel Arenberg for a visit to the Centre for Surface Science and Catalysis (COK) at the Katholieke Universiteit Leuven (KUL).

The work of the laboratory was explained by Prof. Dirk De Vos. COK has its origins, somewhat surprisingly, in soil chemistry as early studies at KUL on layered clays led to work on zeolite catalysis. Today the lab has well over 100 people working on a wide variety of aspects of heterogeneous and homogeneous catalysis and is now one of Europe's leading centres for studies in these fields. COK has participated in a number of FP6 and FP7 pan-European research projects and has numerous research contracts with industry.

The extent of the work undertaken at COK was clearly illustrated during a tour of the laboratories. The catalyst preparation and testing facilities were impressive both in their quantity and quality and the analytical support available to the department was also notable. 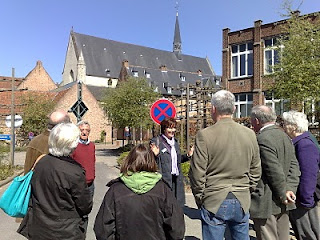 Following the lab visit an excellent lunch was enjoyed at the Brasserie Waaiberg at Tervuursevest 60, Leuven before we started a two-hour guided tour of Leuven. The tour started at the Groot Begijnhof and then proceeded through a number of the university’s college building to finish at Ladeuzeplein in front of the magnificent university library (see below). Some of the group finished the day with a quick drink (and some monumental ice creams!) at the Domus taverne and brewery. 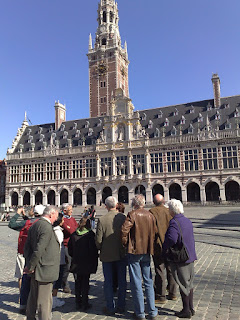 Our thanks to Robert Schoonheydt and the rest of his team at KUL for organising a very enjoyable day out.

The new Leuven Museum was also noted as a possibility for a future section visit.
Posted by RSC Belgium at 11:32 No comments: