RSC Belgium opened its Autumn 2013 programme on 19 September at the British School of Brussels with a prize giving ceremony for the winners of the section's Chemistry Challenge 2013 competition . The ceremony was followed by a lecture from section chairman Prof. Bob Crichton on biological inorganic chemistry.

Well over 70 members and friends of the section attended and applauded the winners of the Chemistry Challenge in BSB's Brel theatre. To achieve top marks in the challenge, set by RSC Belgium Treasurer and former BSB teacher Rita Woodward,  needed exceptional knowledge of chemistry and a sharp mind.

The Chemical Challenge has three sections:  a chemistry multiple choice paper, a structured questions on chemistry, and a 'Thinking Matters' paper that is not chemistry based.
Multiple choice
In the multiple choice section joint first were Jeannine Heetmeyer and Nathan Boydell of the European School Brussels 3 at Ixelles (EEB3). Joint second were Tim Overeem, Owen Tyers and Hangkuon Yi of the International School of Brussels (ISB) with Camila Nagoda of the European School Brussels 1 at Uccle (EEB1) and third was Kazuma Matsumoto of the British School of Brussels (BSB).

The prize winners able to be at BSB on 19 September are pictured below with Section Chairman Prof. Bob Crichton: 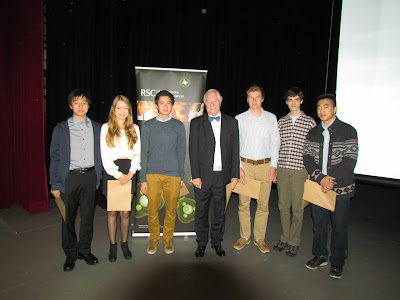 Structured Questions
In this very tough part of the Challenge first was Tim Overeem of ISB, with Ryan Moore of St John's International School Waterloo (St Johns) in second and third was was Patricia Martin (St Johns).

The three prize winners are pictured below with Prof. Crichton. 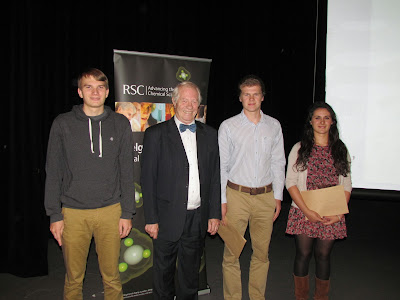 Thinking MattersOur third section gives the non-chemists a chance but the questions are not easy and require some lateral thinking! In this section first prize went to Sofie Thiel (EEB3) with joint second prizes to Patricia Martin (St Johns) and Wendelin Lutz (EEB3) with Caitriona Murphy of the European School Brussels 2 at Woluwe (EEB2) in second place.

The prize winners able to be at BSB on 19 September are pictured below with Section Chairman Prof. Bob Crichton: 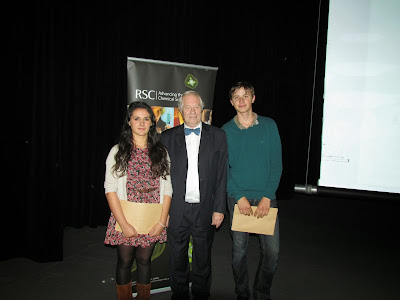 Keith Prize Prize
Tim Overeem of ISB (pictured below right) also received the Keith Price Prize from Bob Crichton for best overall score in sections A and B. First prize winners receive €50, second €25 and third places €10 with the winner of the Keith Price Prize receiving an additional €100. Who says chemistry can't make you rich! 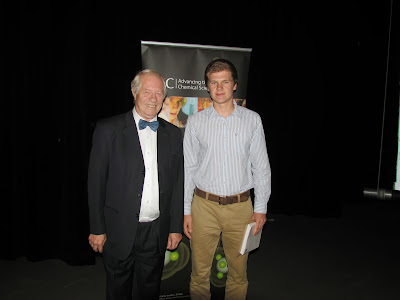 Well done to all the students who participated in 2013 and to their teachers who supervised the Challenge at each of the schools. We will be running the Challenge again in 2014.

Whistle-stop tour
Biological inorganic chemistry is key to understanding almost all of the complex chemical processes underpinning biology and therefore our health. Following the prizes Prof Bob Crichton took his audience on a whistle-stop tour of the two dozen or so main metal ions that have a major role in metabolism.

The metals often have a complex role in the chemical processes that underpin life and recent discoveries that metal ions, such as zinc and copper, play a direct role in the development of diseases such as Alzheimer’s and BSE has created renewed interest in their role in biology.

Bob’s talk was largely based on the recently published second edition of his textbook: Biological Inorganic Chemistry. This revised and expanded second edition was the winner of a 2013 Texty Award from the Text and Academic Authors Association.

Further pictures
The event was followed by the usual question and answer session and an informal networking drinks reception.

The BSB photographer was present throughout the ceremony and lecture and there is an excellent gallery of photos from the 19 September event available on the BSB Flickr website.
Posted by RSC Belgium at 21:46 No comments:

The results of the RSC Belgium Chemistry Challenge 2013 have just been announced and the talented prize winners will be picking up their winnings at a special RSC Belgium event on 19 September at BSB starting at 19:30. This year we received 85 eligible entries from seven international schools in this testing challenge of young people's chemical knowledge and initiative.


And the top results were as follows:

Well done to everyone that took part! We will be running the Challenge again in 2014.

Challenge
The Chemistry Challenge competition was devised and compiled by RSC Belgium treasurer Rita Woodward and is open to students from any school in Belgium. The questions are set in English, but may be answered in English, French, Dutch or German.

The competition is open to school students in their penultimate year of High School (usually aged 16 – 17), and consists of a 2 hour written test held in school and designed to demonstrate the participants’ knowledge of chemistry and their ability to think logically.

Try it yourself!
Now you can test your chemical knowledge and problem solving ability. The 2013 Chemistry Challenge paper can be viewed here. Tell us how you get on!