The evening of 19 May 2016 saw RSC Belgium's last lecture before our normal break for the summer months with a good audience of RSC members and friends enjoying a talk on the 'Conservation of Historical Artefacts' from Dr. Rob Janaway of Bradford University. The venue for the talk was Rubens Hall at the British School of Brussels (BSB) and Dr Janaway explored the various scientific methods available to preserve and restore ancient artefacts retrieved from archaeological excavations around the world.

Rob Janaway explained the various processes that result in the differential decay and preservation of artefacts buried in the soil and also underwater. He then described how, once these materials have been excavated, the various scientific methods that are available to preserve and restore ancient artefacts retrieved from archaeological excavations around the world are used. His talk included case studies of both ancient artefacts and more recent material associated with World War 1 battlefields in Belgium. 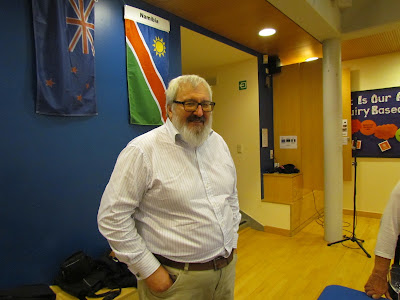 Rob (pictured above) is Lecturer in Archaeological Sciences and has more than 35 years’ experience of Archaeology in both the field and the laboratory. He originally qualified in Archaeological Conservation and specialised in the relationship between materials degradation and their depositional environments.

He has worked on a range archaeological sites including, peat bogs, desert sites, and deep stratified urban deposits. He is a specialist on the taphonomy (the study of decaying organisms over time and how they may become fossilised) and has worked on material from cemeteries, crypts and mausoleums.

He has been involved in taphonomy and conservation of material studies for items from WWI sites in Flanders and he is deeply involved in research on the relationship between soil chemistry, land use and the survival of vulnerable metal artefacts from the medieval battlefield of Bosworth Field in Leicestershire. He has also worked on the analysis of textiles and clothing from the wreck of the Mary Rose - Henry the Eighth's flagship. 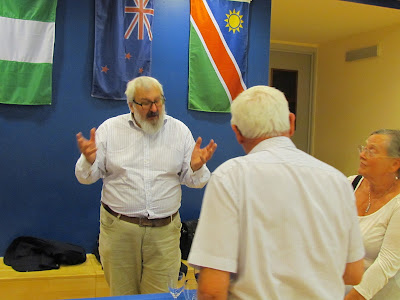 In addition to a traditional archaeological role he acts as a Forensic Archaeologist. He has worked on more than 25 criminal cases for a variety of British police forces in a variety of roles including excavator and taphonomy consultant and he has acted as an expert witness in court.

Jobs entertaining and interesting presentation led to some extended discussions after the talk.
Posted by RSC Belgium at 17:03