RSC Belgium members and friends got an update on progress in understanding Alzheimer's Disease on Tuesday 1st March from Prof. Jean-Noel Octave of the Institute of Neuroscience at the Universite Catholique de Louvain (UCL).

The meeting, held in the Swoosh Lounge at the British School of Brussels (BSB), attracted a healthy crowd of well over 40 who engaged in an extensive Q&A session after Prof. Octave's presentation.

Prof Octave (below left with Prof Bob Crichton) explained that the prevalence of Alzheimer's was around 1% of the population aged 60 - 64, but this doubled for every five years of age increase so at age 85 some 40% of the population would be affected. In Belgium alone this means that some 37 new cases arose every day. 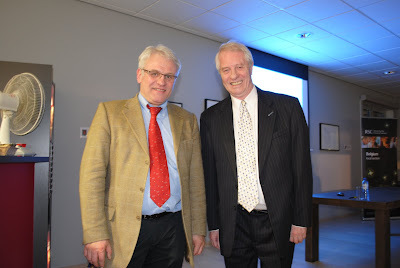 Not genetic
Alzheimer's dementia results in progressive loss of brain tissue and is the most common neurodegenerative disease. It is characterized by the presence of two types of characteristic brain lesions.

The first are neurofibrillary tangles. These are intraneuronal lesions composed of paired helical filaments, whose major component is hyperphosphorylated protein tau. The second type are senile plaques, which are extracellular lesions containing an amyloid core made of Ab peptide. This peptide is produced from the Amyloid Precursor Protein (APP).

Although 1% of all Alzheimer's Disease is due to an inherited genetic cause the vast majority of cases are not. There are no known biomarkers for Alzheimer's disease and definitive diagnosis of the disease is still only possible post-mortem by microscopic analysis of brain tissue. It is possible that advanced magnetic imaging technology may make accurate diagnosis possible in vivo through direct detection of the characteristic lesions in the near future.

Protein problem
The main focus of Prof. Octave's research is on the cellular metabolism of APP, using a variety of cellular models to study the function of APP, which remains unknown. His group also uses transgenic mice that allows evaluation of the physiological relevance of the results obtained in cultured cells.

Although it is clear that our understanding of the protein chemistry underlying Alzheimer's has increased dramatically in the past few years although there is still some way to go to yield an effective intervention as the proteins involved have multiple physiological effects.
Posted by RSC Belgium at 14:32